Believed to be Civet poo - Photo by wildsingapore

Cat Poo Coffee - see the cat, see the coffee, smell the aroma...umhh.....ahhh......argh. Late in the day, I've just spotted cat poo coffee, the most expensive coffee in the world. This is an example of a so called cat, in this case, a small wild cat being utilitarian. The trouble is the civet is not a wild cat. It is not part of the cat family although its appearance is somewhat similar to the Jaguarundi. Never mind it still sounds good.

You know dogs can be useful (working dogs) well cats can be too. But this is not an example. 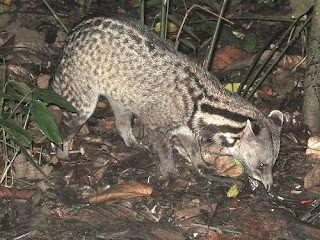 This is a Malay Civet - photo by bluefuton. It is the Indonesian Civet that produces the useful cat poo. But Wikipedia says that it is the Asian Palm Civet (Paradoxurus hermaphroditus). I am not sure if they are the same animal. Indonesia is south of the Malay peninsula.

This is the process for producing a very luxurious and expensive cup of coffee:

The coffee berries are partly digested by the enzymes in the stomach of the civet a wild cat like creature. This apparently improves the flavor. Why else do it this way? The resultant blended coffee is called, aptly, Caffe Raro (rare coffee?) and is on sale (or was) at Peter Jones in London (next to Sloane Square, which is not far from Harrods). It is about 3 miles from where I live. A No. 22 bus stops just outside! And, no, I haven't tried this coffee yet because I don't like coffee. But this is the best cat poo coffee in the world. 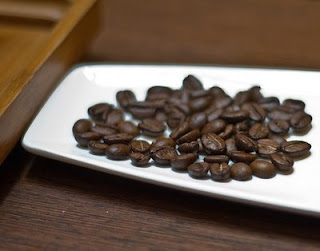 The civet is so useful it is also eaten by the local residents and in some cases can be a pet. This is one incredibly useful animal.