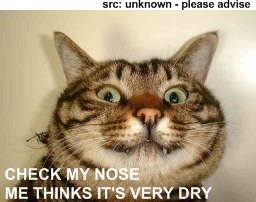 As you look at your cats dry nose, illness and paying a visit to the veterinarian are some of the first things you may first think of. When an owner becomes familiar with the ideal cat nose condition and the most common nose illness symptoms, it is much easier to keep an eye on the overall health of a feline.

The appearance and function of a cat nose changes from time to time with some of the instances requiring immediate medical attention. In the end, depending on many different factors, a cats dry nose may indicate nothing at all.

It is quite normal to find the nose of a cat dry or moist, as the sweat glands of a feline play an important role in its overall appearance and temperature. Owners should know that at any moment, the sweat glands can become active or inactive.

A dry nose tends to feel warm, which many owners often misinterpret as a fever. Cats with a normal body temperature can display a warm dry nose. However, cats with both a warm nose and ears are most likely suffering a fever. Paying attention to your cat is a good way to access the concern of a dry nose. When a feline is acting as they normally would, a cats dry nose shouldn’t immediately suggest illness. An assortment of factors can contribute, including a dry climate. A sign that cats dry nose is cause for concern is the presence of dry, tacky gums, which is also an indication of dehydration.

When a cat’s nose is moist, this too is quite normal as the nasal region can appear moist to various degrees. However, when the nose becomes very wet (especially with heavy nasal discharge) – you may take your cat to the veterinarian to rule out a respiratory infection. A cat’s natural grooming habits and licking may also cause the nose to become moist and feel cool, which is a direct result of moisture evaporation.

When a small amount of clear nasal discharge comes out of your cat’s nostrils (visible at the exit point), this is also a normal occurrence. Yet, an increase in this nasal discharge is usually an indication of an infection, irritation, or inflammation. Overall, it is important to note that the temperature and level of moisture of a cats nose is not always the best way to gauge feline health.

While sneezing and nasal discharge are the most common symptoms of nasal and sinus disease, there are many other signs that indicate an issue with your cat. He or she may rub their nose or paw at their face. A cats dry nose is sometimes a result of excessive rubbing. Blood may flow from one or both nostrils. The mouth or nose may emit an unpleasant smell. When post-nasal drip is present, a cat may excessively swallow. Over the bridge of the nose, you may notice swelling. Additional signs and symptoms include gagging, pain, noisy breathing, loss of appetite, weight loss, and diminished energy.

To get an idea of some of the nose illness issues a cat owner may come in contact with, consider the following common feline nasal concerns:

Nasal Discharge: Cats may experience nasal discharge when faced with various illnesses. It is not uncommon to see clear, cloudy, or bloody discharge. A cat with clear nasal discharge is usually suffering a response to an allergy or sometimes a mild viral infection. When an infection is more severe, cloudy discharges appear when bacteria or a virus is present. Blood found in cat discharge is a sign that a foreign body is lodged in the nose, tumors, serious inflammation, or trauma.

Nasal Congestion and Sneezing: When the nasal passages become congested, cats may display noisy breathing. One of the most common reflexes of the upper airways is sneezing, where irritating material and substances in the nasal cavity triggers this type of explosive response. It is quite normal for a cat to sneeze, but when it becomes a chronic, severe, or persistent problem – medical attention becomes necessary. When sneezing is accompanied by nasal discharge, a more serious concern could be an underlying issue.

Growths: Cats can sometimes suffer growths on their noses. In white-colored cats, sunburn can strike the nose where a form of skin cancer called squamous cell carcinoma may develop.

Injury: Cats may undergo an injury of the nose when they are involved in an accident or a fight with another cat. This is a common occurrence seen between quarreling male cats.

Cat Flu (Feline Upper Respiratory Tract Disease): This viral infection is a common cat disease that can turn into a life-threatening matter. Severe sneezing may affect a feline with cat flu, which can produce bloody discharge if a small blood vessel in the region becomes ruptured. Additional nose illness symptoms of cat flu include an inflammation of the lining of the eyes (conjunctivitis), eye discharge, fever, loss of appetite, and depression. Usually, this medical concern in cats is seen in kittens, elderly felines, or those with a suppressed immune system.

Chronic Nasal Disease: Cats with chronic viral nasal disease are suffering from one of two viruses that attack the upper-respiratory tract. Affecting cats with dry nose and illness, owners are often unaware how contagious feline rhinotracheitis virus (FVR) and feline calici virus (FCV) really are. Cats with chronic viral nasal disease may experience sneezing, nasal bleeding, bilateral nasal discharge (both nostrils), eye discharge, and increased breathing noises. Bleeding associated with the viral disease is slight and when it becomes a more extreme symptom, the possibility of a tumor is high.

While many owners feel that cats dry nose and illness go hand and hand, this is not always the case. The best defense against serious nasal and sinus problems is to learn the signs and symptoms that indicate a need for further attention and action.