In the United States (and probably elsewhere) the cool cat names of 2012 are names that are equally suited to a new born child. The significance of this is that we seem to be treating our cats more and more like a member of the family. Or at least we think we are.

I wonder if the trend for treating cats as members of the family extends to actually doing it; meaning giving our cats equal status and rights. I’ll save that discussion for another time. 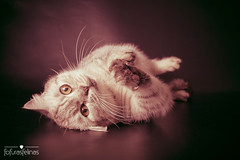 “Lola”, she loves you.
Photo by Giane Portal on Flickr

The research into cat and dog naming trends was carried out by vetstreet.com. You can see where this trend takes us. The modern person has a tendency to be slightly obsessed with celebrity. As a result it is probably fair to say that the names that celebrities give their cats, dogs and themselves might influence our choice of cat names.

Personally I never choose a name that way being slightly anarchic. But the one person most likely to influence choice, today, is the celebrated and now famous Kate Middleton, the Duchess of Cambridge. She and her husband recently adopted a dog, a black cocker spaniel puppy given to her by her parents. They named the puppy, “Lupo”, Italian for wolf and also a surname in parts of the world.

Vetstreet suggest that the top ten trendiest or coolest cat names this year are (in order of popularity left to right):

Lola and Dexter are the individual coolest cat names this year.

Although originating in religion, Lola is now considered quite a sexy sort of name as well as cool. It conjures up a sultry, sexy femme fatale image. Well it does for me!

The present day popularity of this name for cats may originate in Madonna giving her child, Lourdes Leon the nickname ‘Lola’.

Quite a few celebs such as Charlie Sheen and Annie Lennox have named their daughters Lola.

Lolita is a diminutive form of the name. It was the title of the well known film “Lolita”. The name Lolita conjures up a an image of an unintentionally sexually provocative precocious young girl because of this film.

In latin ‘dexter’ means skilled, fortunate and favourable. A name that promotes success for a young man. Do you think a person’s name helps the person to succeed? The say it does and I am inclined to believe that it is true.

To me the name ‘Dexter’ conjures up an image of an all American upstanding young man or respected and reliable senior citizen. What does it do for you?

It can be used both as a surname and given name. It is also the name of at least a dozen towns or cities in the United States.

I feel that it is American name but might be wrong on that.

If you have two cats, one female and one male and you want to be up-to-the-minute with names, you could do worse than name them: Izzy and Ziggy, as they go nicely together.

A search of internet keywords (words or phrases that people use to search on the internet) indicate that cat names beginning with: m, p, w, x, r, l, q, i, e, a, d and t are currently popular.

You know that my cat is ‘Charlie‘. It is a bit trendy therefore! I inherited the name. My late mother named him. My late lady cat I named ‘Missie’ because she was a little, sweet and independent madam.