Domestic cat hunting is rarely on my cat's agenda. This is for three reasons. First she is overweight. Second she is old. Third there's not much to hunt around here.

In the sterilized world of clean suburban living the rodent population is reduced.

When domestic cats hunt and catch prey they often (correction, always, as far as I can see) seem to play with it. It seems that a sadistic and unwarranted side to our cat's character is shown, which is rather unpleasant.

This is not the case, apparently. There are two reasons why a cat plays around with a poor little mouse before killing it unless the mouse dies before your cat gets around to it.

First, there is less chance for your cat to indulge in what comes instinctively to her, hunting. So when the chance does present itself she maximizes the enjoyment and plays out the game as long as possible.

Your cat will hunt whether she is hungry or not. The urge to hunt is independent of hunger. Perhaps also she may not be hungry enough to get "stuck in" and kill the animal as quickly as possible.

Secondly, she may just be a little fearful of getting a bite from the prey so she plays safe. She does this by battering the animal with her front paws.

As a mouse is small, the animal is chucked around the place as a consequence. Some prey, though, can harm a cat and if your cat is a little rusty (due to the reasons mentioned above) she may want to proceed more cautiously.

There is apparently a third reason for the female domestic cat to delay killing prey. She needs to teach her young how to kill. This is instinctive. She will therefore bring the mouse home and kill the animal in in front of her offspring (whether she has them or not) to demonstrate the how the fatal bite is delivered.

There are three types of prey-play (a) restrained which is catching prey but reduced in activity (b) overflow play (the most common), incorporating chase and catch and which is sometimes carried out by hungry cats and (c) play that is an expression of relief at having caught a large prey without being injured. (source: Leyhausen 1979)

Updates Nov. 2010: is a great picture that is a classic cat hunting situation and which is by Laura Sammons the daughter of Joyce Sammons a contributor to PoC and a regular visitor:

And here is a picture I took a little while ago of my cat with a mouse she caught. It is pretty much the only one she has caught in the 18 years of her life! 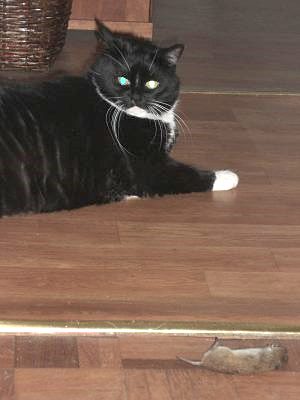 Some serious stuff about domestic cats hunting and playing.