People shouldn’t be searching for exotic big cats for sale because it encourages and keeps in business exotic big cat breeders and these breeders should not exist in my considered view. Breeding big cats for individuals with more money than sense and with little respect for animals is immoral and plain wrong. What these people (the breeder/sellers and individual buyers) should be doing if they want to be involved in big cats and be near big cats is to act on behalf of the endangered wild big cat. That is were more commitment and energy needs to be expended.

There are more “big cat pets” in big cat fetish America than there are left in the wild. An estimated 7,000 remain in the wild, worldwide (yes, an appallingly low number and getting lower despite the high profile IUCN Red List and CITES etc etc.). There are 12,000 big cats kept as pets in America. There are 4,000 of these in Texas alone. There have been 32 people killed and 574 people injured by big cats in the United States since 2004.

A lot of people want exotic cats, big cat cubs; God how cute they are… But when they grow up in the back yard of some irresponsible “owner” they are dumped in a shopping mall. Great going guys… Or if the abandoned big cat is lucky it finds its way to the home of Tippi Hedren, the attractive and steely blond from the Hitchcock movies who has a sanctuary for homeless big cats at Shambala in California, north of Los Angeles. And in providing this invaluable service she gets death threats from the rich exotic big cat breeders, whose sole purpose is to use and abuse our most beautiful creatures for a buck, of course. Because of these death threats her daughter, Melanie Griffith and Melanie’s husband Antonio Banderas would like Tippi to move to Los Angeles to be close to them and safer. But it seems, for the time being at least, that Tippi Hedren is going to stay put.

Here are some pictures of Shambala: 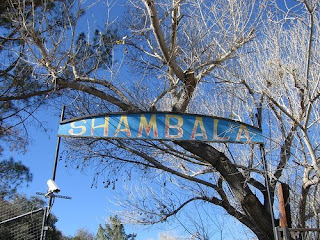 The entrance to Shambala – photo by seanmonkey 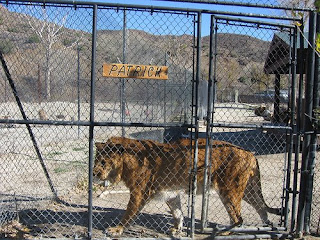 This is Patrick, a lion/tiger cross and very large because of it. I guess at one time he was one of the exotic big cats for sale. His enclosure abuts Tippi Hedren’s home. He likes to talk at night, which keeps Tippi Hedren awake sometimes – photo by seanmonkey

The business of breeding privately (outside of zoos) and selling to individuals is worth $100 million per annum (about £70 million pounds) in the USA. It is big business and apparently worth killing for. And killing is something these guys specialize in, the canned killing of beautiful big cats is something they organize as well. These are called “canned hunts”. And I know it is almost unimaginable but people actually pay up to $50,000 (£35,000) to shoot a tranquillized tiger in an enclosure so that they can go home with the animal’s head and skin and proudly declare to the family, “look what I hunted today honey…aren’t I brave”. Tigers and cubs can be purchased for as little as $500 at car boot sales, apparently (can that be correct?). This is carelessness beyond imagination, yet in some States in the USA, it is easier to keep big cats than a dog, for which a licence is required. It is also worth mentioning that there has been no successful reintroductions to the wild in Africa of big cats bred privately (or otherwise) in America.

OK, for me, people like Tippi Hedren do a wonderful job. I praise her and admire her for her courageous work – well done we all say, those of us who care about the planet and our fellow animals and particularly the magnificent big cats. All those people looking for exotic big cats for sale; I ask you to change course now. Turn away from your more base desires to possess and own a fantastic animal in the same way you want to possess a fancy car. Buy another car instead but please do not treat animals as inanimate objects. Lets try and be more altruistic and thoughtful about this, please, I implore you.