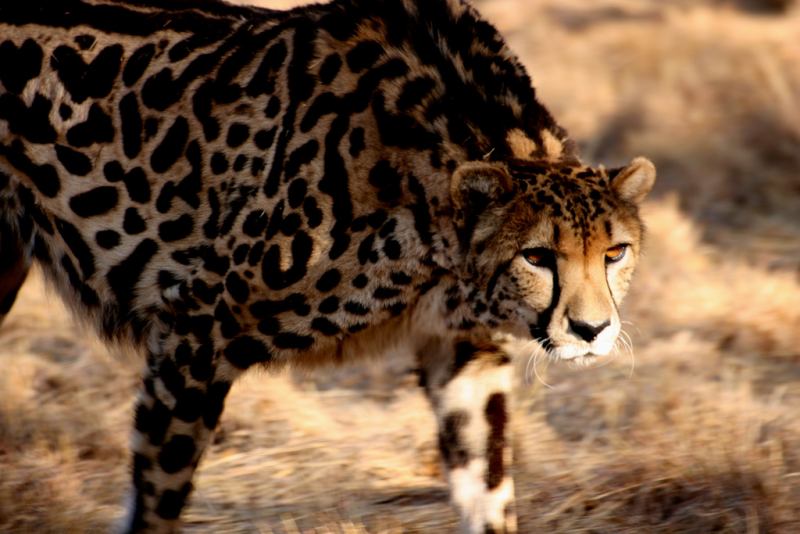 There is a certain similarity between the coat pattern of the king cheetah and that of marbled Bengal cats or perhaps the pattern is somewhere in between the classic spotted coat and the marbled coat of the Bengal cat. I particularly refer to the dense lines running down either side of the spine of this wild cat.

In Bengal cats the coat pattern is simply down to breeding from cats that carry the genes that produces the required pattern. The genes responsible are the Agouti gene, which produces the ticked or banded hairs, the tabby gene which produces the pattern of the hairs and the interaction of a group of “nonallelic genes” that warms up the dull yellow banding of the Agouti gene. You can see the spotted Bengal cat in the header to this webpage, which is not dissimilar. I suspect something similar is happening with regard to the king cheetah only it is a naturally occurring mutated gene.

This cat is from South Africa. Although one was photographed in 1974 in the Kruger National Park, South Africa, most of the evidence came from pelts, sadly, or even stuffed animals. By 1987, apparently, evidence of the existence of 38 cats of this type had been collected. However, it seems that this mutation was first spotted in 1926 when a cheetah skin from a king cheetah was purchased by a farmer in southern Rhodesia (now Zimbabwe). This skin was given to a museum in Salisbury and examined. It was thought then that the skin came from a cat that might have been a hybrid of a mating between a cheetah and leopard. It was sent to the British Museum and studied by R.I. Pocock who formally described the king cheetah. Initially it was described as a different species and then classified as a cheetah with different markings caused by a single gene. This mutated gene is recessive, which in practice means that its existence may not be apparent for long periods of time. It is believed to be a mutation of the tabby

The fact that the gene is recessive and that people liked to wear the skin of this cat made this cat extremely rare. In the wild (at 2002) the king cheetah was found only in Botswana, Zimbabwe and the Transvaal and they were almost unheard of in captivity. However, at the De Wildt Cheetah and Wildlife Trust they have a breeding program and a large number have been successful bred since May 1981, when the first in captivity was born (at August 2009 their website is not working). This first captive born cats were the offspring of classically spotted cheetahs confirming the presence of a recessive gene. Other mutations have been recorded such as melanistic cheetahs (black) and white cheetahs. These are rare.

This map shows where the Transvaal is in relation to Botswana and Zimbabwe: 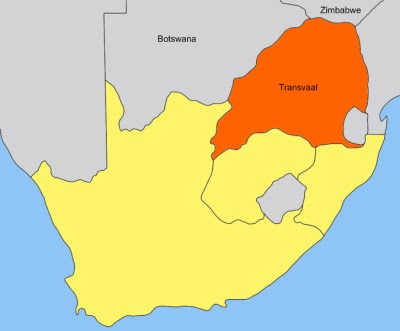 Transvaal marked in red with Bostwana and Zimbabwe – Reproduced under Wikimedia commons license – the creator of this map is the author of the Wikipedia article on theTransvaal. He created it from an earlier map by Messhermit.