This is an interesting observation from Dr Bruce Fogle in one of his books (Complete Cat Care) which is confirmed anecdotally on the internet. Usually placid longhaired cats become ‘markedly more active and involved in family life’ after their fur is trimmed down.

This is usually in the form of a lion cut in which the fur on the flanks is more or less trimmed to the skin while the fur on the extremities is left alone. A Persian cat ends up looking like a lion, hence ‘lion cut’.

RELATED: The world’s best-known veterinarian/author believes that declawing is barbaric.

One website reports anecdotal evidence that longhaired cats seem happier after a lion haircut. For me, this begs the question as to whether the well-documented passivity of the nervous Persian is due in part to the extra-long fur that they have to wear 24/7.

Often Persian cats are full-time indoor cats because they are valuable and gentle. They are perceived as not being suited to the indoor/outdoor life.

THERE ARE MORE ARTICLES ON THE LION CUT AT THE BASE OF THE PAGE.

I’ve always believed that selective breeding of Persians has created a cat that is too extreme both in facial appearance and excessively long fur. They can’t maintain their fur through grooming. Their owner has to intervene and groom them which looks wrong to me.

The benefit of trimming long fur as stated, if true, is a positive aspect of the lion cut for longhaired cats. The downside is that vets should do it and it requires an anesthetising some cats. There is a health risk when anesthetising cats.

Jackson Galaxy says (Total Cat Mojo) that the lion cut is not necessarily cruel. In the summer is can be a benefit to cats with very long fur.

And if the cat becomes livelier, there is a benefit there too.

Long fur is created by a single gene called ‘fibroblast growth factor 5’. When a cat inherits inactive copies of the gene the coat is long. Other genes come into play to create the variations in coat thickness, density and length.

Genetic evidence points to longhaired cats being imported by the Vikings into Scandinavia well before Persian cats were imported from Persia into Italy by Pietro della Ville and from Turkey into France by Nicholas-Claude Fabri de Pieresc in the early 17th century (the official breed histories).

The lion cut: no, it’s not cruel

"The lion cut: no, it's not cruel" - the words of Jackson Galaxy in his book Total Cat Mojo. It ...
Read More

I have just written an article about catnip and whether it is ethical for cat guardians to give it to ...
Read More

Persian cat completely shaved except for his face

What are humans getting up to? First we breed a cat with a very flat face which is completely unnatural ...
Read More

I don't believe lion cuts can be justified and I explain why. Look at this poor cat's face and demeanour ...
Read More 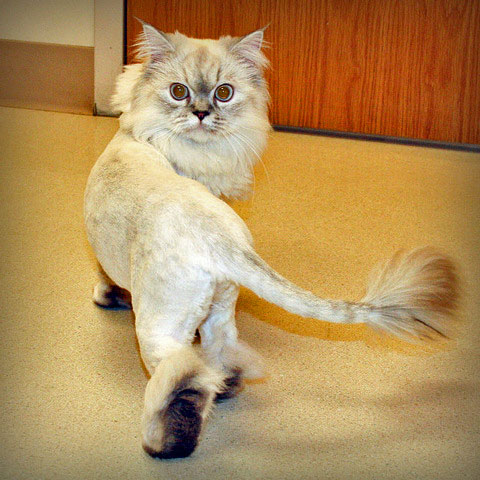 Cat lion cut – do some cats really like it?

I am not sure about the cat lion cut. It is quite popular and on occasions is carried out by ...
Read More

Uhmm, we had painted cats. We have lion cuts. Now we have something between the two: fancy feline haircuts. My ...
Read More