This is not hot off the press news but it is news which is still relevant today because it highlights the lack of interest from law enforcement authorities in enforcing animal welfare laws in the state of Wisconsin.

This is interesting because just today I wrote an article about whether it is legal to trap to kill feral cats in Wisconsin and both the chief of police and the Department concerned with natural sources demonstrated a lack of interest in the matter.

In this instance a man who hunts bears with hounds presumably came across a cat in a trap. The cat was alive as the trap was not the sort which kills cats but simply contains them. The man let his hounds terrorise the cat. There is a video of it presented online by the person who runs the website “Our Wisconsin, Our Wildlife“. This person must be an animal advocate and therefore one of us. I’m not sure that you would like to watch the video therefore I have also presented a screenshot from it as an alternative. 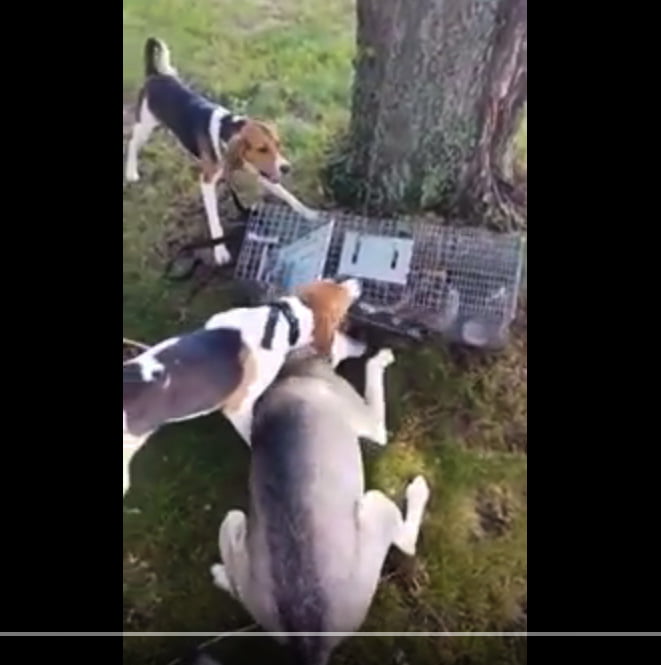 The incident was reported to the police and the Wisconsin Department of Natural Resources but they were disinterested in taking up the matter. They concluded that no crime had been committed.

I would like to disagree with them. This is because the cat was treated in a cruel manner. Under the Wisconsin Cruelty to Animals Statute “cruel” means causing unnecessary and excessive pain or suffering or unjustifiable injury or death. This cat was subjected to unnecessary suffering by way of mental torment. You can read the law on the Internet as it can be looked up quite easily. It is Chapter 951.

Therefore, I conclude that the Wisconsin authorities have a poor attitude towards animal welfare.