Empty 9 Lives cat food cans on a bench used I believe to feed stray cats. Morris would be proud. Photo by Kilgub (Flickr)

Morris the Cat is the British equivalent of Arthur. Arthur is an all white cat, while Morris is red. Or orange to me and you. In fact Morris is an orange tabby cat and there is more than one of them. There has been a series of Morrises which is only what we can expect as the life of a cat is shorter than the life of the cat food product that he sells, promotes and represents, 9lives® cat food. Another famous British "advertising cat" was Solomon, a chinchilla longhair who began his career advertising carpets and then starred in the James Bond film, Diamonds Are Forever. 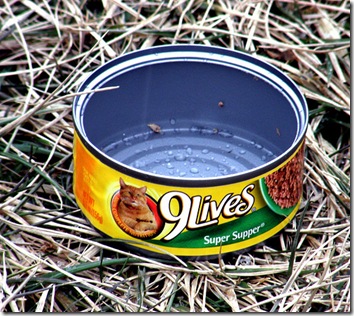 You can see Morris on the tin - photo by fauxto_digit

I guess from a strictly commercial point of view cats are good business. They are extremely popular companion animals. They are clean and cuddly. Women and intelligent people prefer cats1. That translates to intelligent women of which there are lots. And women most often look after the cat in a family household. Women buy the groceries and cat food...Voila, it's good business fronting a cat food product with a cracking good cat and Morris is a big male ginger with his own Twitter channel that has over 1000 followers! People treat him as real. Well he is real but he is not writing tweets. But I think that if he was they would be better! Morris is a good example of how we can connect with a product, in this case, cat food, through a cat. He humanizes the whole process...err...no...I mean catizes the whole thing. 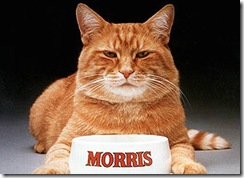 Morris is referred to as the "advertising mascot" of 9lives® cat food. Morris the cat has appeared on packaging and television commercials. The cans of cat food bear his signature and he is very finicky. "Finicky" is the word used on the 9lives® website. The concept being that the food has got to be good if Morris likes it. On the website (at April 2010) Morris the cat is seen as Morris the cat doctor, chief and cool dude duly dressed up in appropriate garb.

Morris the cat helped out the American Humane Association in June 2007. He helped support the Adopt-A-Cat Month promotion held annually to encourage people to adopt cats from shelters inundated with litters of kittens that needed rehoming. He acted as the spokescat. He played this role earlier in 1975 and 1976.


This video shows Morris at San Francisco Macy's Union Square. The voices are those of the cats. Morris is playing Mr. Cool Dude Esq. in this video.

Morris the cat has also been the author of three books: The Morris Approach, The Morris Method and The Morris Prescription. Morris is very wealthy having been featured on a television show called “Lifestyles of the Rich and Famous”!

The original Morris was from the Hinsdale Humane Society, in Lombard, Illinois. This is a Chicago-area animal shelter. He was found by animal handler Bob Martwick, an employee of the Leo Burnett Advertising Agency, in 1968. His real name was "Lucky"5. He died 1978, 19 years of age (a good age). He as buried in Martwick's back yard.

All the subsequent cats playing the important role of Morris have been rescue cats. At at April 2010 it is said that the current Morris lives in Los Angeles. This is appropriate as it is the largest city in the USA to have banned declawing of cats (one of 8 cities in California to have done so).

4. The picture of Morris is copyrighted but fair use is pleaded as the image is small, I am indirectly promoting 9 Lives cat food and this site is for charitable purposes.