Pictures of fat cats are quite popular. I am not sure why. Perhaps people are looking for rich people rather than cats that are overweight! This page is about cats….

Fat cats are unhealthy cats. Fat cats indicate poor cat caretaking. I guess that is obvious. You probably think I am being far too serious. Perhaps I am, but I don’t like looking at fat cats because I see an unhealthy cat or a cat that will become unhealthy with a disease such as diabetes. A multitude of health problems stem from being overweight.

I think that you will find that Guinness World Records have taken the heaviest or fattest cat off their agenda because it simply fostered cat abuse through overfeeding.

The serious stuff said, here is a selection of pictures of fat cats.

The above picture of a fat cat is of Claus. He was the world’s fattest in 1970. He lived (a shorter life?) in San Francisco in the 1950s. You can read about Claus by clicking on this link.

The above picture is of Wolfie. He is not a champion fat cat, just an ordinary fat cat! You can read about Wolfie on this page. He weighs 30lbs. That is about three times the normal. 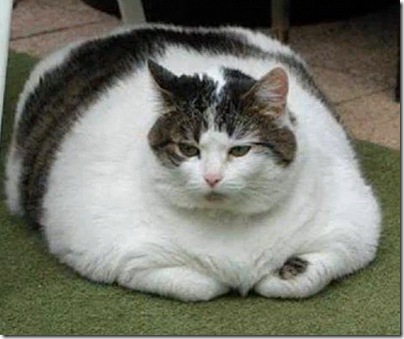 The above fat cat picture looks as if it might have been digitally enhanced but it is not clear. If this cat really is this size it is an example of gross mismanagement by the person who cares for him, unless he has a medical condition, which is highly unlikely.

The little picture of a fat cat left is of Gigi. She weighed 42lbs and lived in England in the 1970s.

The world’s fattest cat weighs (or weighed) almost 47 lbs. All the leading contenders for the fattest cat in the world weighed over 40 lbs. You can see a list and a world record holder on this page.