..and one Big cat

Before I started to build this website some 2 years ago, like the majority of people I pretty much thought of wild cats as the big cats, the cats that get publicized a lot. I knew about them but I had no clear picture as to their status in the wild. I thought that they were just there in some far flung place. Not really a part of my life but interesting to see on a television documentary.

And the television documentaries hardly ever, as far as I can remember, talk about the perilous state of the wild cats. They seem to lull us into a sense of cosy acceptance that all is more or less in balance. It is not. If the situation for the big cats is dire, for the forgotten, sometimes still unknown small wildcats, life in the wild is destined to be a piece of history. In generations to come, youngsters will marvel at some rare zoo animal called a Kodkod (one of the small, threatened wildcats) and there will be a sign on the glass panel explaining where it once lived in the wild.

It surprised me that in the 21st century we know very little about the small wildcat such as the Chinese Mountain Cat, the Andean Cat and the Bornean Bay Cat to name three. These cats are little treasures. They belong to the world, to all the peoples of the world but unfortunately they live in parts of the world where conservation is very much a low priority or simply an obstacle to big business. And in the West we feed big business in the Asia by buying their products.

There are two classic cases, which we would not normally know about but for the need in my case to research matters. The first, in fact concerns a large wild cat, the now very rare Sumatran tiger, illustrated below: 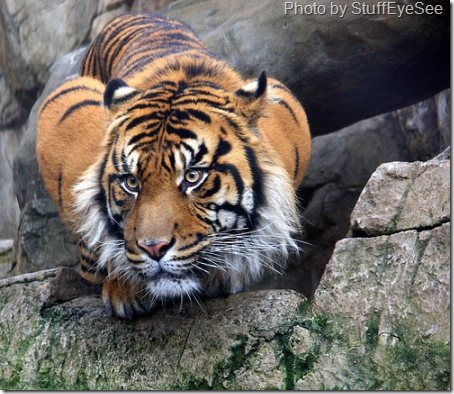 This beautiful animal lives in the forest. Unfortunately those forest are in Sumatra and Sumatra is in Indonesia where it seems that business and making a buck relegates this wild cat to collateral damage in the chase for profit. And I can understand that. The trouble is that these now rare wild cats (there are less than and estimated 400 in the wild in the entire world) belong to the world and the Indonesian government is the guardian of them on behalf of the world. That, in any event, is my view. The trouble is that the west is no better. We almost extirpated (destroyed) wild cats many years ago in say America. We contributed to the huge decline in the wild cat populations. Asia will now say that we have no right to criticise, particularly when Asia is playing catch up, economically.

In the case of the Sumatran tiger the west is still doing its bit to destroy it by buying photocopying paper from a conglomerate called Asia Pulp and Paper (APP). Having been involved in the clearance of large tracts of rainforest already, it now has government clearance to knock down a huge area of virgin forest in Sumatra, which will wipe out yet more tigers and other species. It shocked me to learn that we log beautiful trees to make boring photocopying paper. Can’t we make all of it out of rubbish?

The picture is little different for the small wildcat that has as its home the dwindling forests of Borneo, the Bornean Bay Cat. Deforestation for timber and oil palm plantations are the major threats to survival. Another threat is the usual body parts trade. The entire island of Borneo is being denuded of forest to supply consumers in the west, I guess. The population of this cat in the world can only go in one direction, downwards (and quite rapidly). A 20% drop is predicted over the next 2 generations. I would expect that to be a generous assessment.

It is no different for the others (see lots more on the Wild Cat Species page). All the threats to wildcats originate in human population growth which in turn leads to higher levels of intrusive human activity and economic growth. In the relentless march of economic growth the wildcats are but a minor obstacle and the great work by all the conservationists of the world are nothing more than a blip on the road to extinction in the wild.