Puma cat the name – this is a page that contains links to other pages about this wild cat and some detailed content on the famous and well used name. It is a subject that needs addressing as thoroughly as possible. Interestingly, the Guinness World Records tell us that this much-admired mammal has the greatest number of names of any mammal with a total of 40. I am not sure that I have got all 40 on this page but I’ve done my best.

This wild cat has the greatest number of names of any of the wild cat species. In fact, it is known to have more names that any other mammal in the United States (correction: in the world!). To newcomers to the wild cats of the world this no doubt causes initial confusion (it did for me, in any case). The wide range of names is probably due partly to the fact this cat occupies the largest range of any terrestrial mammal in the Western Hemisphere, extending from northern British Columbia in the north of the Americas to the southerly tip of Chile in the south. 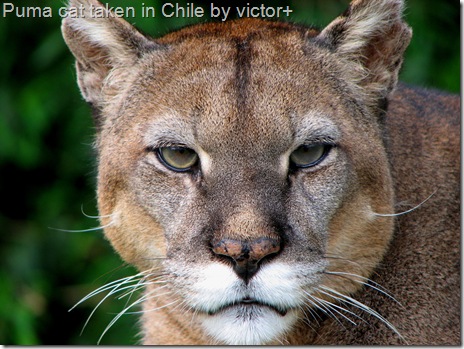 Above: Puma concolor. Veterinaria Metrenco IX región de Chile. I think this is a rescue centre and veterinarian centre in Chile. Photo by victor+ (new window)

Note: there is always a complication as to whether to capitalise the names of wild cat species. They should not be capitalised unless the name contains a proper noun such as the name of a place. Nonetheless, you will see names capitalised and this is okay because grammar is flexible but strictly speaking it is incorrect.

Two of its names have been used extensively by people to name babies, numerous products, car models, teams and more recently older women chasing younger men! These are versatile names! The names are puma and cougar. A testament to the attractiveness of the name and the cat. This, though, causes confusion when trying to look up information about this cat on the internet. That is partly why I prefer to use books for research and have named this article puma (cat) to distinguish it from the other “products” and people that are so named. Also, the name “puma” is the preferred name for scientists and the most accurate name as it follows from the scientific name: Puma concolor.

Puma climbing a tree. Photograph is in the public domain.

The name “puma” comes from the language Quechua (Quichua in Ecuador), which is the language of the Andes region of South America. The people who spoke Quechua founded the well-known Inca empire in the 15th century and the capital city that they built was in the shape of a puma cat (src: MS Encarta). The word means “powerful” in the Quechua language (src: http://uniplac.net), an apt name.

The next well-known name is “cougar”.  The story behind this name is complicated! It seems that the story starts with a German geographer, George Marcgrave in 1648 who used the term “cuguacuarna” (try and say that), a Guarani word.  It would seem that he was trying to write sassúarána, which is a Tupi (indigenous Brazilian language) word meaning, “like a deer” or “false deer”. Cuguacuarna was shortened to “cuguacuara”. This was further shortened by Georges Buffon a French naturalist to “cuguar”.  Later modified to cougar in English.

Catamount or puma.Photograph is in the public domain in my view.

‘Puma’ is used across South America, subject to regional variations. In North America, scientists use puma while the public also use puma, cougar and mountain lion. The latter probably being more commonly used by the public. In the Eastern States this cat is apparently called panther (e.g. the Florida panther) or ‘painter’ (a strange modification/corruption). In the Western States the people use mountain lion or Mexican lion (further south).  Spanish speakers name this cat a lion.

The IUCN Red List of Threatened Species™ lists these names:

“Catamount” is interesting. It is a shortened version of “cat-of-the-mountain”, which comes from the Spanish “gato monte” (Google translate says this means “bobcat” but it must mean “mountain cat”). The word “panther” is a general term that is normally used to describe a black (melanistic) big cat e.g., black panther meaning an all-black leopard.

The term “lion” was given to the cat because of its coat colour being similar to the African lion.

Below are some more articles on the puma.

Puma cat – all aspects with links to more

by Ryan Rachman (North Carolina) I live in the state of North Carolina approximately 430 meters from the Peedee river ...
Read More

Conservation of the puma a.k.a. mountain lion – full discussion 2022

Introduction: This page has been refreshed, added-to and republished on February 1, 2022. It needed to be because assessments on ...
Read More

How far can pumas jump?

The puma, a.k.a. the mountain lion, may be the most athletic jumper of all the wild and domestic cats. Sport ...
Read More

If you were researching whether mountain lions attack and kill domestic, stray and feral cats, this photo and video probably ...
Read More

Pictures of a puma on an iceberg off the Upsala glacier in Patagonia’s Los Glaciares National Park, Argentina

These pictures and video are all over the internet and you can see why because no one has seen a ...
Read More

Mother punches mountain lion who had her son in its jaws

NEAR CALABASAS, WEST OF LOS ANGELES-NEWS AND COMMENT: A mother punched a mountain lion to force it to release her ...
Read More

How many miles do mountain lions travel?

How many miles do mountain lions travel in a day? Unfortunately there isn't much information on this topic but nonetheless ...
Read More

Is a mountain lion bigger than a wolf?

Yes, the mountain lion aka puma and cougar is slightly bigger than the wolf on average but it is hard ...
Read More

This is a nice video of a female puma with cubs defending her family against what she considered to be ...
Read More

Injuries incurred when pumas attack prey can ultimately kill them

In one study, 27% of natural mortality of the puma was related to injuries sustained while trying to capture prey ...
Read More