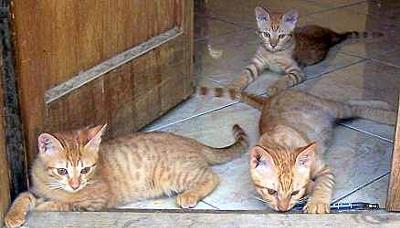 Yep, I'm the same Athena who sent you the info on the Egyptian Mau belly flap. The photo was my Ankhesenamen.

A huge genetic study done in 2007 by U.C.Davis which took DNA samples from domestic cats around the world can be seen here.

In it, they determined that the "Egyptian Mau", which is a breed mainly descended from two naturally spotted cats owned by the Princess Troubetskoy, is not actually Egyptian in heritage.

Because the Egyptian government has for many years had a policy of sending out employees (veterinarians!) to put out poison for feral cats and dogs, and also shooting them, a group of us are now attempting to have the native Egyptian cats recognized as their own breed, the Nile Valley Egyptian.

You can read more about this problem, and follow our progress, at: Maati -- sorry link broken at Jan 2013.

I'd really appreciate it if you could help us spread the word about this problem. We're looking for other people who would like to get involved.

Application has been made to TICA for status as an Experimental New Breed. Designation, a Natural Breed indigenous to the Nile Valley of Egypt. All colors, no outcrosses. There are 3 Breeders at this time.

There are 3 color divisions: Standard (solids, solid-and-white, tortoiseshell, calico), Agouti (like an Abyssinian, individual hair shafts are colored in bands), and Lybica (spotted, striped, solid and agouti, all with stripes on the tail, on the middle third of all four legs, and face markings including eyeliner, mascara, and forehead markings).

This is the oldest existing domestic cat breed in the world; the "Feline Missing Link" between all domestic cats and their only wild ancestor, the African wild cat (felis sylvestris lybica). It is not related to the Egyptian Mau. 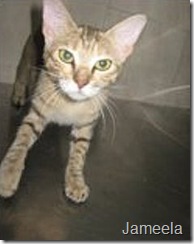 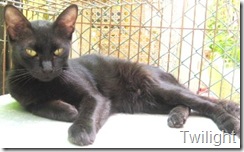 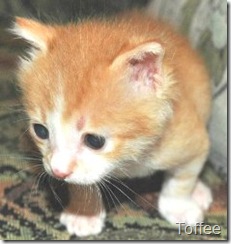 The photos above are all from the "Adoptable" page of EMRO, the Egyptian Mau Rescue Organization. EMRO was named years ago, before we decided to attempt to have Egyptian cats recognized as their own distinct Natural breed (this year). These are all photos of cats which were rescued off the streets of Cairo by EMRO.

Because they are Egyptian ferals, they will be the foundation for the Nile Valley Egyptian breed. Twilight (the solid black) and Jameela (the bronze spotted and striped) are scheduled to be airflown from EMRO in Cairo to me in Houston some time this month, and will be my first two queens in the beginnings of my Nile Valley Egyptian cattery, Maati.

I'm hoping to acquire a red spotted male as my first stud. (Toffee and Calli are still available for adoption...if you have any interest.) As I mentioned in the breed description, we expect to see 3 color divisions among the native Egyptian cats, Standard, Agouti, and Lybica.

Some of these photos demonstrate the Standard colors, which are solids, solid-and-white, tortoiseshell, and calico. Twilight is a solid black. Toffee (the kitten) is a red-and-white male. The fourth, the tri-color, Calli, is a calico.(With only 4 photos, I ran out before I got to the tortoiseshell cats, but there are photos of several on the EMRO adoption page, if you want to look there). Jameela is a bronze spotted cat. She demonstrates the Lybica coloring.

There is a lot more variation than is permissible in the Egyptian Mau standard. (One of our breeders, Carol with Cairo Cats, took ten native Egyptian cats before 3 TICA judges...the judges said that only one of the ten could be passed as even a "beginning" ("foundation") cat for Egyptian Mau breeding, even though to Carol, she thought they all had potential.)

I don't currently have any photo examples of the Agouti coloring, but they will look much like Abyssinians, which have the "agouti" gene. Red and blue spotted (and striped) cats occur naturally in Egypt, but are not allowed in any existing spotted breed of cat. They *will* be allowed in the Nile Valley Egyptian, from its creation, as will striped cats.

All NVEs are short-haired cats, as all long-hair genes were mutations that developed outside the Nile Valley. (Some of our breeders are interested in creating a long-haired division; if they do, it will be called the "Shirazi", but since the long-haired gene isn't native to Egypt, it can't be an NVE.)

All other existing domestic breeds are either sub-divisions of the NVE, or they possess mutations of NVE genes. The only exceptions are the recently-created wild hybrids, and CFA doesn't even consider wild hybrids to be "cats" (according to the definition in their rules).

I have some updates on the Nile Valley Egyptian project.

We now have 2 cats officially registered with TICA as Experimental Nile Valley Egyptians. In a year, we hope to apply to have the "experimental" connotation dropped from the breed name when we apply for Registration Only status.

I am attaching 3 photos for you to look at - see above. One is the original one that I sent you of Jameela (photo no 1). The second one is a photo of an African wild cat, felis sylvestris lybica (photo no 2). The third photo is of Jameela again, 6 months later (photo no 3). In that time, her spots have faded dramatically, her ears have gotten larger, and her legs have gotten longer. Except for her color and the broken necklace on her chest, she is the spitting image of an African wild cat.

Our two registered NVEs are also showing signs of having their spots fade with maturity, much like lion cubs' spots fade as they reach adulthood.

This is the clue we were looking for, that proves that Egyptian ferals are more closely related to the original wild stock than any other domestic cats in the world.

From The Nile Valley Egyptian Cat to Egyptian Mau Cat