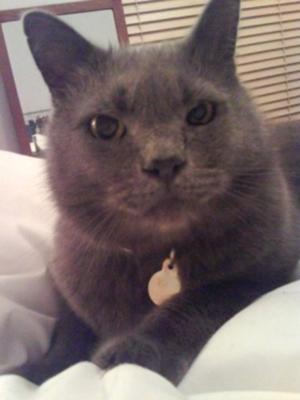 I got my cat, Thomson, from a rescue centre 2 years ago. He was 9 years old at the time and was blind in his left eye and also had a hip replacement!! Why you ask did I decide to go for a cat with seemingly so many problems? I simply fell in love with him.

Thomson is like no other cat that I have ever come across. I have only recently discovered that he is a Chatreux. He is the bravest cat ever, with absolutely no fear of anything, which sometimes is not always a good thing.

I got Thomson shortly after moving to a new house in a new area where I didn't know many people. However in the 2 years that I have had him he has introduced me to more people than I could ever have imagined.

His most favourite thing to do is to go visiting people who also live on my road. He very confidently walks into peoples house, jumps on their sofa, or even on their bed just to say hello. Absolutely everyone on my road knows and loves him. One guy who lives a few doors up is not a cat lover at all, but Thomson has definitely won him over. He says that he loves Thomson's attitude of just walking into anyone's house like he owns the place.

As much as he loves to go out visiting other people, he also loves being in the house with me. He sleeps on my bed with me and likes nothing more that getting cuddled up with me.

He also loves to travel in the car, I have taken him to the shops before in the car. He jumps in the back seat then onto the parcel shelf where he will stay for hours at a time if the sun is shining onto him.

Sadly last year he got an infection in the eye that he was blind in, so after trying unsuccessfully to treat with drops, I decided it was best that the eye was removed altogether. He is a much happier cat for it, and it has increased his street cred no end.

Getting Thomson has just been the best thing ever, he can be so annoying at times when he wanders off a couple of miles more than he should and I get a phone call to pick him up (I secretly think that he is just too tired to walk all the way back so gatecrashes someones house knowing they will call me!!)

It would be great to hear if anyone else has a Chatreux as naughty and wonderful as mine.

From THOMSON - THE LUCKIEST CHARTREUX CAT to Chartreux cat