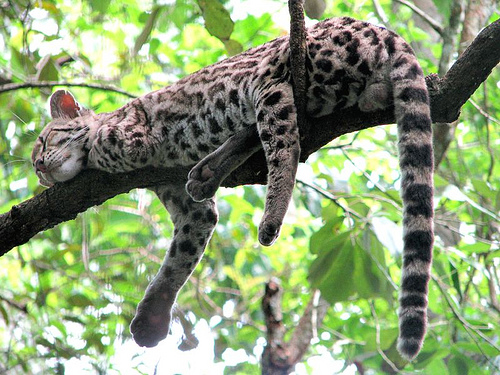 I have decided that the margay is the best climber. This is quite a difficult question because all cats are good to excellent climbers. Of the big cats the leopard is the strongest climber but the tiger climbs beautifully as well. However, no other wild cat is quite so attuned to the task of climbing trees as the margay. An alternative name for this cat is the “long-tailed spotted cat”. To return to the leopard, there is a video of a leopard successfully hunting a baby monkey (a common event) by climbing a tall, spindly tree to a height of around 30 feet. Totally awesome for a large cat.

That in itself gives a clue because the longer the tail the better it is at assisting in balancing which is a quality in demand when traversing narrow branches at a height.

This is a tree living species of cat. It evolved from the ground-dwelling ocelot.

Living in dense forests, it is the most arboreal of all cats with several unique features. This beautiful little cat can leap through the trees almost as acrobatically as a monkey.

It runs down tree trunks headfirst assisted by its extraordinary rotating hind feet. They can rotate through 180° allowing the cat to grip when facing downwards. This cat has been seen to run along the underside of branches. They can hang from branches by their hind feet like a squirrel.

Margay skin. One reason for its demise.

The margay is so totally adapted to an arboreal existence that it hunts, mates and nests above ground. It’s prey are arboreal creatures such as small mammals, tree frogs, lizards and birds.

Interestingly, the female gives birth to a single large kitten normally. Unsurprisingly this is the smallest litter size in the entire cat family. It is consistent with an arboreal life. It would be impossible for a mother to care for a large or normal-sized litter in a nest above the ground. In line with this interesting fact is another: the mother has only one pair of nipples.

This is a rare species of wild cat becoming rarer by widespread illegal hunting for its beautiful coat and because of massive deforestation which is destroying its habitat: the forest. It lives in tropical Central America and to the south of Brazil and is no longer in North America, while in Mexico there are very few sightings.

P.S. the clouded leopard is a close second as best climber.