William Hogarth – The Distressed Poet….I am interested in this painting because I have driven past Hogarth’s country residence many times. The interesting point is that it is no longer in the country but firmly inside what might be called central London on the A4 going west towards Heathrow airport.

The A4 is a very busy road and a dual carriageway. The house is marked by the blue flag. If you click on the flag you can see a video on Hogarth.

Here is the painting. The reason why it is on this site is because of the cat in it! 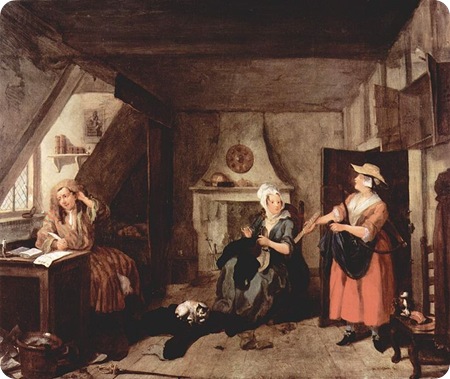 William Hogarth (10 November, 1697 – 26 October, 1764) is well known English artist, satirist and critic. He was born in London (Bartholomew Close) and died in London where he is buried (St. Nicholas’s Churchyard, Chiswick Mall). Both places are not far from each other. He was a London man, it seems. There are a lot of people who spend their entire lives in London and why not. It is all there.

The painting is of a poet (naturally he is poor and financially stressed). He is struggling to compose. How did he make a living? Once again the depiction of the cat is rather stylised. This seems to be the case fairly often with painters of this era.

The cat is meant to have kittens around her but I can’t see them. Her tail is striped which is not unusual but the markings are too well delineated to look natural. She is white with a symmetrical black marking on her forehead and ears. This cat looks like a Turkish Van and may well be a cat of that breed. At the time there was no cat fancy and the concept of purebred cats and stud books (records of lineage) were not even a dream.

However, the Turkish Van is an ancient cat breed (evidence going back to 1600-1200 BC). The only problem is that the first Turkish Van cat was supposedly imported into England in 1955! So the cat in the painting is either an unreported earlier importation (not impossible I would have thought – Hogarth was connected and well off and may be painting his cat!) or it is simply a stylised version of the cat. Perhaps the painting was based on a cat that either was or looked like the Turkish Van that Hogarth had seen.

One thing goes against it being a Van. The conformation is too British moggie and not elegant enough for modern breeders. But perhaps the original Van looked like this. Cat breeders have tended to breed their own ideas of what a cat’s shape should be into cat breeds.

The Following is a verbatim transcript of an article about this painting published in 1902 and is therefore in the public domain due to effluxion of time. If not I argue fair use.

“….it was given by Hogarth to a Mrs. Draper, at whose death it was bought for five guineas by a solicitor named Ward. On his death the picture became the property of Lord Grosvenor, with whose descendant, the Duke of Westminster, it remains. The painting is full of amusing satire, cleverly interwoven with pathos. The scene is that of the Poet’s humble garret-humble in many senses of the word, for the plastering on the walls is cracked and fallen in a score of places. He, poor man, enveloped in a dressing-gown, seeks inspiration by candle-light in order to finish a poem on ” Riches.” Inspiration, apparently, is not easily attainable, even with the assistance of Bysshe’s “Art of Poetry,” which is part of a library of four volumes. With grim irony a map of the ” Gold Mines of Peru ” is immediately over his head. A copy of the ” Grub Street Journal” lies on the floor, together with his sword and coat, the latter forming also a bed for the cat and kittens. Near him sits his wife, mending the Poet’s nether garment ; a careful, thrifty soul, ” the most loveable figure that ever Hogarth drew,” who looks up with some surprise at the entry of an irate milkwoman, who with tally extended demands payment of her score. But payment seems a remote contingency under the circumstances, for the open larder is empty, save for a prowling mouse ; and to add to the domestic misfortunes, the. piece of meat, heedlessly left upon a chair, is being stolen by a dog. The creditor’s shrill tones wake the infant, whose cries, joined to the disputation, wellnigh distract the votary of Parnassus. On the wall at the left hand hangs the wife’s long, hooded cloak. Above the mantel is a set of circular mirrors,’ and on the shelf itself, a loaf of bread, a book, the teapot and cups, and a sauce-pan. Several other details will be noticed, such as the empty pewter, etc. The whole scene is evidently typical of many such in real life. It not infrequently happens, even in these times, that an author’s subject is foreign to his experience. And, after all, with such a theme as Riches, our Poet has magnificent exercise for his imaginative powers.

The engravings of The Distressed Poet differ slightly in some of the details. In the first impression (1736) the Poet is writing on “Poverty”; a picture of Curll, the notorious bookseller, being thrashed by Pope (see ” The Dunciad “) occupies the wall in place of the Gold Mines ; and the Poet’s library is larger by two volumes…”

It comes from this webpage to which I am indebted: http://www.oldandsold.com/articles29/hogarth-6.shtml (new window)

From William Hogarth – The Distressed Poet to Cats in Paintings