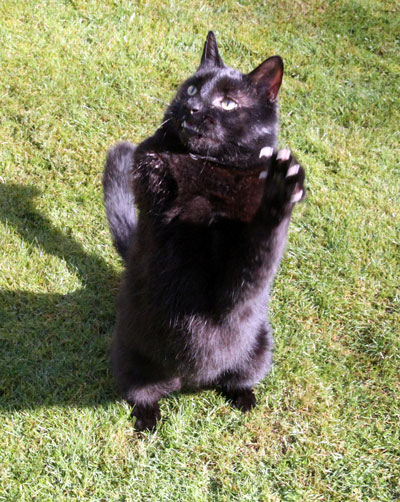 My three-legged cat Charlie trying to catch a tease. Does he carry the Toxoplasma gondii protozoan? No idea.

This story won’t go away and I believe it is a serious threat to the welfare of the domestic cat in the USA and Europe. It may have long lasting repercussions on the level of cat relinquishments. It may also result in the people who are best placed to be cat caretakers doing without a cat companion. I am referring to senior citizens and people living alone.

I am writing about that much discussed parasitic protozoan called, Toxoplasma gondii, which is carried by a proportion of domestic cats, usually without symptoms. The parasite can be transferred to people (it is zoonotic). Most people who have this parasite inside them also have no symptoms.

However, I keep reading that there is evidence that the Toxoplasma gondii protozoan can get into a person’s brain, damage it, cause inflammation of the brain and thereby cause depression. This leads to suicide. That is the cause and effect. Personally it makes me worried about cat welfare because some research may have linked the domestic cat to people who commit suicide. We need further research and the situation to be clarified.

However, a study found a correlation between scoring high on an assessment for suicide risk and a positive test for the toxoplasmosis protozoan. I think this is the study: Toxoplasma gondii Immunoglobulin G Antibodies and Nonfatal Suicidal Self-Directed Violence by these scientists: Patricia Langenberg, PhD; Ahmed Saleh, PhD; Niel Constantine, PhD; Olaoluwa Okusaga, MD; Cecilie Bay-Richter, PhD; Lena Brundin, MD, PhD. I can’t access it at the date of this post because the link to it is broken.

People who had the parasite in them were 7 times more likely to attempt suicide, the study concluded. That should very disturbing to people who are concerned about the welfare of the domestic cat.

However, there also needs to be a bit of balance put into these stories on the internet, which feeds the arguments of the cat haters, poisoners and shooters.  I know I keep referring to them but they are a significant body of people in the United States, the home of by far the largest population  of domestic, stray and feral cats in a single country (around 200 cats million in total). This is negative publicity that harms the image of the domestic cat. Potentially, there are significant domestic cat welfare issues at stake.

I have written quite a lot on this subject (possibly too much) so won’t repeat myself here. Click on the link to see the results of a custom Google search for articles on PoC.

One article that puts some balance into the debate is this one: Truth about Toxoplasmosis and Cats.

One aspect of this matter is almost never discussed. The cat picks up the parasite from another animal, infected birds or rodents. I presume this happens when the cat preys upon a bird or rodent. Can rodents and birds pass the disease to people? I am told that the cat is the “primary host”¹. This chain of events would support the argument that cats should be kept in all the time. I personally don’t like that idea but it is an argument that needs to be aired.

Serologic (blood and body fluids) tests will show if a cat has been exposed to the parasite. If the test is positive in a cat that is healthy it means that cat has acquired an immunity to the disease of toxoplasmosis and is “not a source of human contamination”¹. Should we bother ourselves with asking our vet to do a test?