It is poignant and incredibly sad when you visit Facebook and read the cat rescuers’ pleas for adopters to come forward quickly because cats at shelters are about to be euthanized. The dreaded ‘code red’ label is a desperate state of affairs when time is of the essence for adoption and when cats are about have their lives teminated. 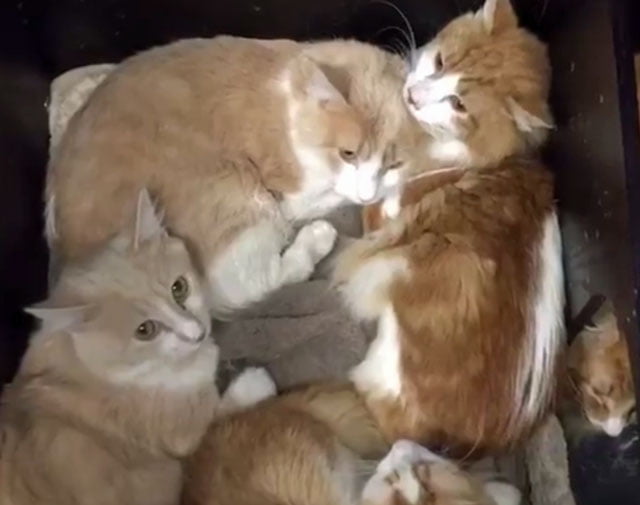 The euthanized cats. One is alive at the time of this post.

I am referring in this instance to a plea from Rhonda Attig 3 hours ago on June 8th. There is a video attached to her request (see on this page).

The video shows some sad and beautiful cats in what seems to be a crate. On June 6th there was a plea to adopt them and on June 8th the message was that all had been killed except for Griffin who is the last cat standing. He is a 19 month old neutered male.

Rhonda hopes that at least Griffin can be saved. All the cats came together from a home where there were far too many cats. It was a hoarding case. The cats’ owner surrendered them (a least she saw the light). The cats had classic URIs, so common in hoarding cases. URIs get worse at shelters due to stress.

The cats are not well socialised. I suppose this is not uncommon either as when there are too many cats and they are breeding in an ad hoc manner the owner does not have time to socialise the cats. They lose control and don’t cope.

I have embedded the FB post and video. It is sad as all the cats have been recently euthanized except for Griffin. I can’t identify him in the video.

Let’s try and save him. Act now. Read the FB post by Rhonda which provides details on how to adopt.