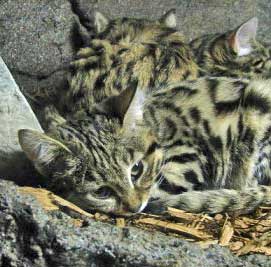 The name of this diminutive cat, the smallest African cat species, is slightly misleading as the paw pads and undersides of the feet are black but nothing else. Attempts to rename the cat failed. This secretive wild cat is found in the south west corner of the African continent. It mainly feeds on mice, shrews and gerbils. The black-footed cat lives in a dry open landscape but despite that, they are very successful hunters (60% success rate). The scientific name is Felis nigripes. Other names for this cat are:

Longer overview of this cat species

I would like to emphasize conservation of this rare cat, the most important topic for all wild cats. The black-footed cat is listed in Appendix I of CITES. Appendix I lists species that are the most endangered among CITES listed animals and plants. This wildcat is listed as vulnerable in the IUCN Red List of Threatened Species™ (formerly Least Concern). Vulnerable is in the upper mid range of threatened wild species and indicates that this cat’s survival in the wild is threatened. 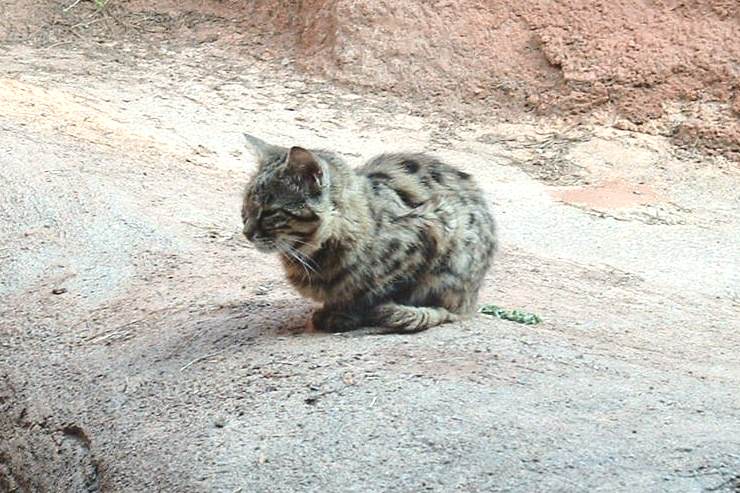 Both the above links shows us the status of this cat in terms of its survival in the wild. On a scale of 1-10 this cat is at about 5 in terms of its survival. There are no pictures of this cat in the wild that are available for publication as far as I am aware. I keep banging away, but projections as to future survival in the wild of this cat cannot be good. The Red List™ status is getting worse and Appendix I CITES is as bad as it gets. It is no good simply recording the status. Long term strategies need to be formulated to preserve this species and that starts with the question, “do we care”? By “we” I mean the people on the ground in the countries of this cat’s habitat (see below). They are the people who are at the sharp end and responsible.

It is the smallest of the African wildcats. This wildcat looks like a small tabby domestic cat. In the above photograph you could not spot the difference (almost – there is always the coarser more functional nature of the fur, for example). This is a small wild cat with black paw pads, hence the name (see photo above). It is not the only wildcat with black feet. The African wildcat has them too. The cat’s size is that of a domestic miniature cat at about 2.9 lbs for females and 4.2 lbs for males averaging 3.5 lbs, which is small even for a domestic cat. See a comparison of domestic cat sizes to wild cat sizes. The rusty spotted cat is another small wildcat of similar small size. On the linked  page, you can see a chart and some more numbers about wild cat species by size.

The coat is a spotted tabby with banding on the legs, the natural markings for a wildcat as it offers the best camouflage. It is also probably the most common coat type for domestic cats. Interestingly, the skin is pink throughout. 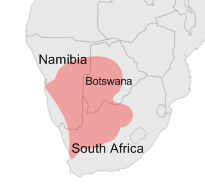 The black-footed cat behaves like most cats, domestic or wild. Shy and solitary this cat hides in the daytime (under rocks, scrubs and in redundant termite mounds) and is active at night hunting small animals such as birds and rodents. This cat inhabits parts of Namibia (the country where the cheetah is most commonly found – see cheetah habitat), South Africa and Botswana (see map right – the red shaded area). Note: this range may be a little smaller than is actually the case – please see the link and map immediately below.

This cat travels relatively long distances to find prey (about 5 miles) and needs to consume a large amount as a consequence (about 18% to 20% of body weight). There is more on the black-footed cat habitat and behavior on this page: Black-footed Cat Range.

Although preferring to steer clear of confrontation this cat will fight ferociously to protect herself if needs must. They would appear to be a little unsociable and contact between the male and female takes place little and mainly when mating.

Below is a better map than the one above. The range is a little different but that does not surprise me. The exact ranges of the all the wildcats are not known exactly or are at least changing all the time. The map below was made by me based on the IUCN Red List™ map and it can be refined by visitors. It can be moved around the window by holding left click and moving the mouse in the usual way.

The habitat in which this cat hunts is not an easy one, being open and dry with some vegetation as cover. Notwithstanding this, the black-footed cat is highly successful at hunting having a success rate of 60%. They are active hunters and instigate a frech hunt every half hour during the night.

Apparently there are three styles of hunting:

Fast: the cat moves fast at about 2-3 kilometers per hour and forces prey out from under cover.

Slow: this is more a stalking activity in which the black-footed cat slinks between areas of cover at under one kph, ever alert to potential prey. The video shows the slow stalk and late plunge.

Sit and Wait: this is what is says. The cat will sit near the den of a rodent and wait for activity. The cat appears to be at rest but is ever alert for the slightest sound or movement.

Birds are stalked and in the final couple of metres the cat leaps high and long to grab the bird either on the ground or in the air. The bird is killed in classic domestic cat style by a bite to the vertebra severing the spine. Some cats pluck birds before eating. The black-footed cat just eats the lot and quickly (2-4 minutes), although it might pluck some feathers.

As mentioned, hunting takes place at night, all night and in all weathers. Prey consists of:

This cat probably needs to make some big kills (e.g. bustard or hare) as this is more efficient and they will gorge on these kills and eat a quarter of its body weight in one go. They also scavenge.

Their highly effective hunting is based in part on their known attitude, which is of a certain ferocity, courage and tenacity. There is anecdotal evidence of this cat successfully attacking sheep and goats by piercing the jugular vein of the animal, hanging on until the job is done. No doubt this is very rare, however.

This section refers to how the black-footed cat relates to other cats and how and where it finds a home (home range).

In this regard this cat is pretty typical, which means the male cat has a home range that is bigger than that of the female and his range overlaps several female ranges. Their range is surprisingly large, traveling on average 8 kms during a single night in winter and less in summer as their is less of a need to feed.


In terms of density of population, in a study in South Africa (North Cape Province) this was found to be 13 cats per 100 km².

Communication is typical of the cat too including scent marking and scraping the ground and objects, although they have some particular vocalisations. They have a miniature tiger roar (to communicate over a large distance), a gurgle (at close range), the usual hiss, which as I recall seems to be preceded by a spit (the cluck sound) and a purr. The hiss is the similar to that of the sand cat.

We know that both females and males spray urine to mark territory as a form of communication. It tells others where they are and when they were around (by the age of the odor). Well, the Sunquists recite the observation of a male black-footed cat that sprayed no less than 585 times the night before he mated! For a cat that gets its water exclusively from its prey (when necessary) that is rash behaviour in respect of water conservation!

The period when the female is sexually receptive (estrus or oestrous) is shorter than usual at 1-2 days. This is thought to place a need on the cats to communicate over large distances hence the mini-tiger’s roar mentioned above. The mother rears her young in burrows such as in termite mounds. The quick development of the young, the short period of estrus indicate a vulnerability.

Thereafter the timetable for mating and pregnancy is as follows:

It is difficult to classify any wild cat it seems to me in respect of its survival in the wild because of a scarcity of information. This certainly applies to the black-footed cat. It is very secretive which makes studies difficult, which in turn makes reliable current data hard to come by.

As mentioned it is classified Vulnerable by the Red List. This may be an under classification. What might save it is its size. It is not able to pose a threat to farmer’s livestock and is therefore not persecuted like the larger cats.

The IUCN Red List of Threatened Species™ quotes the usual threat, namely habitat loss and degradation. Persecution is indirect through being killed by general pest control by the use of poisons etc.

As to conservation, CITES lists this cat in Appendix I as mentioned but this is little more than paper protection (see CITES in relation to cats). They say it is protected by legislation across most of its range but hunting is only prohibited in Botswana and South Africa.

There are a number of reserves that fall within this cat’s range, one of which is marked on the map above.

Apparently it is known that the Black-footed cat will breed with the Desert cat or African Wildcat and the domestic cat (in captivity).