The black-footed cat is Africa’s smallest cat. An adult weighs about 2 kilograms (4.4 lbs or about half the weight of the average domestic cat). It is one of the world’s smallest cat species (the rusty-spotted cat is probably smaller). At first appearance this diminutive cat looks like a slightly exotic domestic tabby cat. The inky black or brown spots hint at a wildcat, however. They are the kind of spots you see on a serval or serval wild cat to domestic cat hybrid (Savannah cat). Small wildcats make up for their lack of size in fierceness when challenged. 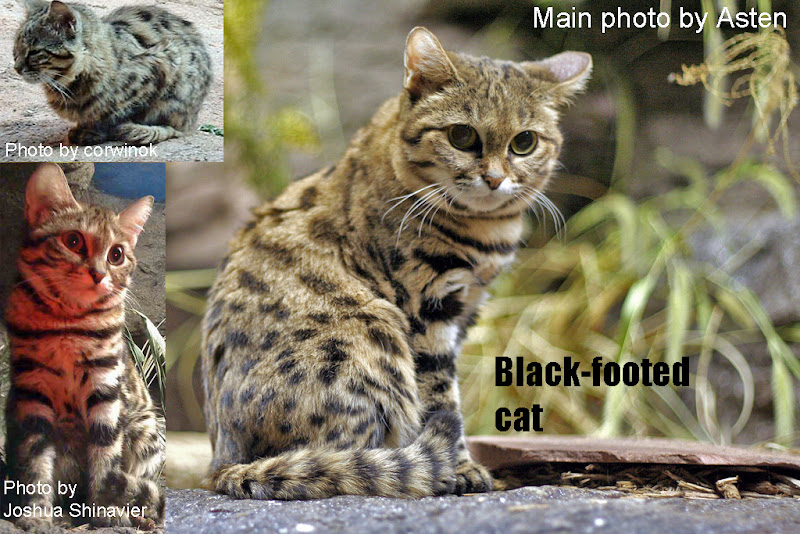 The ears are rounded and the eyes large. Although the eyes of the rusty-spotted cat and margay would appear to be slightly larger in proportion to overall size. The tail is banded and has a black tip. It is about half the length of the head and body combined.

The coat’s background color “varies from cinnamon-buff to tawny”. The spots merge to form bands on the legs, neck, the tail as mentioned and on the sides of the face. The double lines on the cheeks almost mirror the rusty colored lines of the rusty-spotted cat. 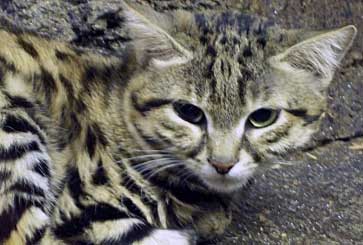 The paw pads are black – hence the name. Apparently the skin is unpigmented. Usually a cat’s skin is pigmented to the same pattern as the fur (note the Shynx cat) . There are no ocelli (light colored spots on the ear flaps). The back of the ears are the same color as the general background coat color.

From Black-footed cat description to the range of this cat.