Lets get one thing out of the way first. In this article, “cat gait” refers to the way a cat walks. The word “gait” is quite rarely used so I thought that it would be useful to clarify that.

This nice video shows clearly how a cat walks. This calico cat whose voice is very female (nearly all calicos are females) likes the treadmill. Cats often do. There is another well known video of Bengal cats using a wheel-like treadmill. Great for exercise if you are a full-time indoor cat. 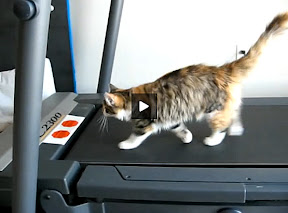 You can see from the video that when walking the domestic cat moves both the foreleg and hind leg on one side almost in perfect unison or together. Both left side legs go forward while at the same time both right side legs move backwards and so on.

You can also see that the hind leg moves a little ahead of the foreleg. This form, of what I would call, symmetrical walking is not always the case in the animal world. Apparently, it is rare.

As expected, the serval, a medium sized wildcat, has the same gait but the rear leg moves more in advance of the foreleg than is the case with the calico domestic cat (see video immediately below). This may be because the serval has longer legs, the longest leg to body size ratio of all the cats, wild or domestic. 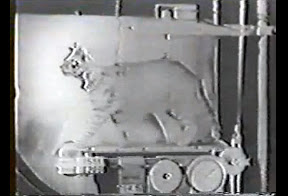 The video above has a sinister side to it. The person who uploaded it says that the cat has been rendered “decerebrate” for the experiment.

This means the cat’s brain was non-functioning. This is probably achieved by irreversible surgery. That is the way of humankind, I am afraid to say. What this is said to show is that the movement is not managed or directed by the brain.

You can also see how cats walk on their toes. They are digitigrades. This is one reason why declawing is cruel. The part of the leg that goes from the paw to the first join is the equivalent of our foot. When cats sit they rest on their “feet”. Dwarf cats use their “feet” more than normal cats.

It appears that the cat’s gait has evolved due to its anatomy, which is a combination of flexibility of spine and skeleton coupled with fast twitch muscles and its habitat. Although I don’t think that there has been in depth research on that. The cat gait is said to conserve energy and be more silent.