This is a cat rescue organisation run by a lady in America where between January 1, 2011 and September 2016 1,782 cats were euthanized. The rescue organisation is called Project Cat and the person who created it and who runs it is a vegetarian whose name is Gail Mihocko. 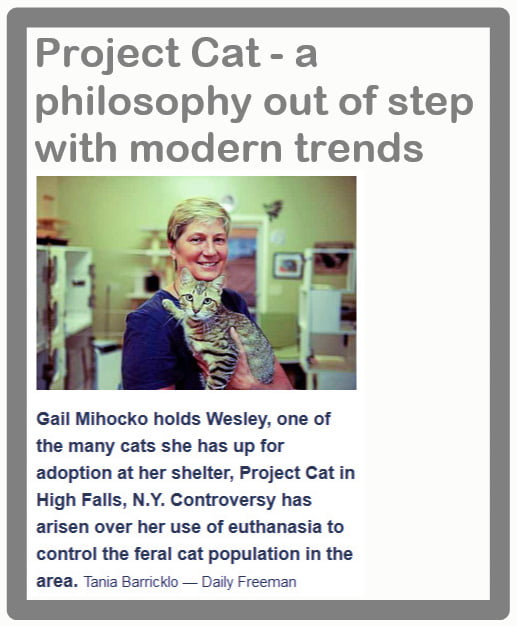 Gail’s philosophy is the same as the philosophy of PETA. This is the philosophy which states that it is best to kill feral cats humanely rather than place them back from where they came having been neutered or spayed and vaccinated, to live their lives as best they can.

Gail’s philosophy opens up the debate about how to manage feral and stray cats. You can add to that community cats which are semi-feral or semi-domesticated cats living in the community.

Recently, Gail applied to the town of Rochester in Ulster County for a permit for her animal shelter which was granted. She applied late because she opened the shelter in 2002. Because she prefers to euthanise cats which she deems as being unadoptable, obtaining her shelter licence has opened a debate between TNR advocates and those who support killing feral cats. A lot of people disagree with Gail Mihocko.

There is a Facebook page entitled “Shut down the Cat Killing Project Cat”. It is dedicated to opposing the work of this non-profit organisation. People accuse Gail of trapping and euthanising indiscriminately resulting in some domesticated cats being euthanised. She denies this absolutely.

Gail believes that the only way of managing feral cats is to euthanize them. I think this attitude is out of step with the general objectives of cat rescue: to save lives. Interestingly, when you go to her website there is no reference to this philosophy. I believe that she should declare her attitude towards feral cats on her site. She’s fudging this.

Gill also believes that wildlife needs to be protected so one reason why she is euthanizing an extraordinary number of cats for a cat rescue organisation is because she wants to protect wildlife. Should that be her role as a cat rescuer?

Many people believe that simply removing feral cats from the environment by mass euthanasia or any other means is not the best way to deal with them. Also many people disagree that all feral cats live miserable lives. Many feral cats live perfectly acceptable lives sometimes as long as domestic cats.

The only way you can justify euthanising feral and stray cats is (a) to protect wildlife and (b) because you think that their lives are so miserable you want to save them from the misery and therefore killing them is a preferable outcome.

I tend to disagree with both of those reasons. It has not been proven conclusively and scientifically that predation by stray cats has had a massive impact upon wildlife as stated by ornithologists. Also feral cats are a human created “problem”. Is it moral to kill them en masse?

Gail refused to say how many cats she takes into her shelter each year. She says that the number is irrelevant. She also won’t say how many of her rescue cats are adopted out but her website indicates that 28 have been adopted since August 2015. If that number is correct it is a very small figure compared to the 1,782 cats that she has euthanised over five years from 2011.

By contrast, Ulster County SPCA state that they have euthanised 80 dogs and cats compared to her more than 2,000 cats over the past 10 years. The difference is stark. The SPCA say that they bring into their shelter 1,000 animals a year and euthanise under 10 of those animals.

Gail states that she often takes in cats from hoarding situations which the SPCA turn away. In defence, the SPCA state that this is untrue. They don’t turn away cats that have been hoarded it is simply that Project Cat gets there first.

Personally, I am surprised to read that a modern cat rescue organisation of this type (independent and private) has a philosophy which is the opposite to that of no-kill shelters. There is a gradual expansion of no-kill shelters in the USA. It is possible to achieve no-kill and it has been discussed often on the internet. It seems to me that a policy of mass euthanasia is a backward step in our relationship with feral and stray cats.

Click to go to Project Cat – “Beyond just a cat shelter” – not sure what that means but it sounds rather sinister to me knowng that there is so many cat killings at the place.