In this painting of 1747 by Jean-Baptiste Perronneau, Portrait of Magdaleine Pinceloup de la Grange, née de Parseval, you see a nice grey cat.

It immediately struck me that the appearance of the cat reminded me of the Chartreux. The Chartreux is a purebred cat. It is France's cat in the same way that the Maine Coon is America's cat.

The face is very distinctive. The muzzle is square. This cat breed is sometimes referred to as the smiling cat. It is a cobby cat with slender legs and always gray. 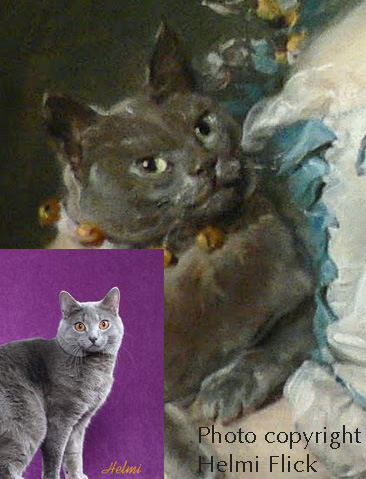 Breeders have kept the same standard for hundreds of years so the appearance of the cat has not changed significantly or at all.

I don't know if this cat in the painting is a Chartreux but it is highly likely.

If that is the case we have a purebred cat before the cat fancy was invented and before any formal cat breeds existed. By formal I mean registered and accepted by cat associations. Cat associations didn't exist until late in the 19th century.

There is one thing wrong. The Chartreux eyes should be copper coloured. The eyes of the cat in the painting are of a colder color.