A very good point about my last article ‘Declawing, Defingering, No Difference’ was raised by Clare on facebook who said: ‘There is one difference, I think. A declawed cat’s entire body is affected, not just its fingertips’

She is right of course, thanks Clare. 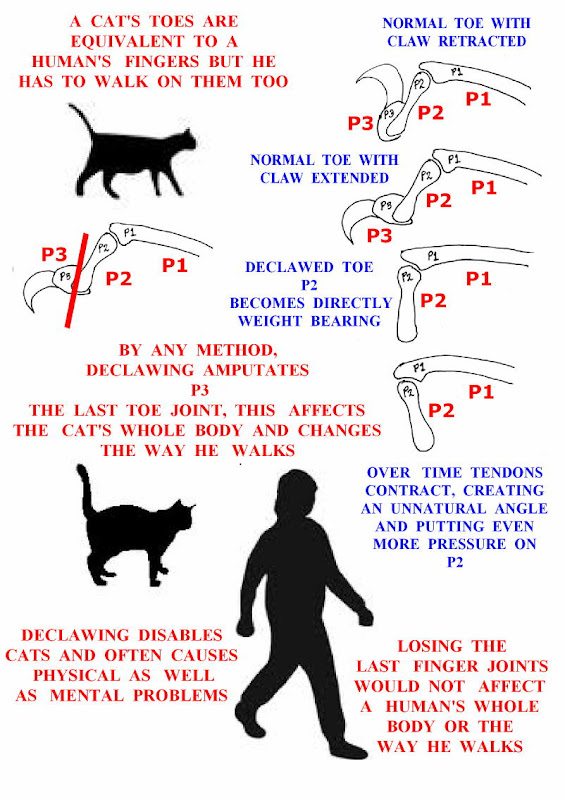 Declawing throws cats off balance, this forces them to learn to walk in a very different way and can cause painful and irreparable damage to the spine.

I personally know two people with missing finger ends, but for a long time I hadn’t realised that as they cope so well. They had adapted of course, just as declawed cats do. But the big difference is that after the shock wore off, their whole bodies were not affected at all by the loss of their finger ends. They walked as they always had.

Had it been toe ends they lost then of course that would have affected the way they walked.

We must remember that a cats toes are equivalent to our fingers not to our toes, but they not only grasp with their fingers, they walk on them too. A healthy clawed cat uses his paws like we use our hands, for many day to day things. But human amputees brains are affected !

From Ruth who is a Physical Therapist Assistant:

‘In almost 3 years I’ve only talked to one amputee who didn’t have phantom pain. The feeling that the missing limb is still there seems to be universal and can persist for years’

Scientists like using cats in experiments on the brain because they say a cat’s brain is so similar to a human brain. Therefore, almost certainly declawed cats suffer from phantom pain too.

When people say ‘My cat doesn’t know he doesn’t have his claws, he continues to sharpen them’ they are so very mistaken. The cats brain tells him he needs to dig in those claws for exercise and also to remove the outer husk as new claw grows underneath it and that is what he’s trying to do. He doesn’t understand why his body isn’t doing what his brain is telling him to, so he keeps on trying!From Dr Jean Hofve D.V.M:

‘Declawing changes the way the cat’s paws function, and this creates stress on the joints of the paw, wrist, elbow, shoulder, and spine. The cat’s gait changes, as weight is shifted backward from the toes to the large rear pad of the paw.

Research has demonstrated that, after declawing, cats shift their entire weight more toward the hind legs. This is quite a feat, considering that the front legs normally bear about 60% of the cat’s entire weight.

Within 6 months or so, normal weight distribution among the four legs is restored to pre-surgery values. However, changes and stresses within the paw persist and may even worsen due to normal contracture of the severed tendons due to scar tissue formation.

Over time, this altered stress can contribute to the development of arthritis.

In most older declawed cats, the toes are completely “frozen,” immovable even under deep anesthesia.

No human would choose to have their finger ends amputated but a cat has no choice. He puts his trust in his caretaker, but sadly that trust is misplaced in people who pay a vet to remove their cat’s very essential finger ends/claws, thus disabling him in many ways, for his entire lifetime.