The so called first Abyssinian cat, Zula Zula is shown below. The picture was created in 1874. I don’t know who created it. The timing of its creation fits quite nicely into the history of the Abyssinian cat. Zula is meant to be the cat that was brought back to England by an officer in the army who was based in Egypt and who might have also been to India.

The picture was first published (it seems) in a book by Dr. William Gordon Stables called Cats, Their Points and Characteristics and Curiosities of Cat Life 1874. Dr. William Stables was Scottish and he wrote a large number of books. He was not it seems a specialist on cats.

The truth is that we really don’t have much of a clue as to the history of the Abyssinian cat although a lot has been written (however see the picture and story in the comment below). I think what is more interesting about this picture is the appearance of the cat. 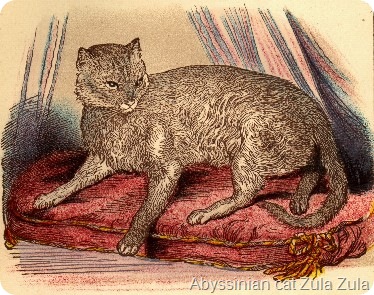 I have also included the photograph, above, of an Abyssinian cat from 1907, which bears out the more stocky body conformation of this cat breed at this time. The two are very similar.

I have stated this before a number of times but it seems to occur quite a lot. The cat in the picture of Zula is considerably more cobby (less slender) than the current Abyssinian cat which is meant to be slender and athletic; what the cat fancy call “foreign” in body conformation. See Cat Body Shapes. 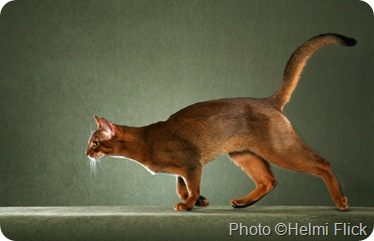 I think the above photo by Helmi Flick taken this year (2009) of Hobgoblin pretty well sums up the difference in conformation. A number of cat breeds have been transformed in this way.

If I am correct in that the Abyssinian has become more elegant during the 21st century because of breeding then it calls into question the argument that the cats depicted in Egyptian cat art are possibly Abyssinian cats because the cats that are the subject matter of sculptures and drawing etc. from Egypt of that era are considerably more slender than Zula. They are more likely to be Egyptian Maus (still feral cats today in Egypt), I feel.

A point though is that artists in those days were sometimes not that good at getting the proportions accurate and this may be a factor but the photo supports the appearance as being accurate.

I have discussed the history of the Abyssinian cat (Origins

) but I am now inclined to believe that the Abyssinian is a cat created to look like a Jungle cat or was a Jungle cat hybrid, originally, in India. The Chausie is just that.

To have a cat called the first Abyssinian cat, Zula Zula is convenient. I am not sure it is possible to say a single cat is the first unless the cat has been deliberately breed, which is not meant to have happened with this breed.