Painting of a Tabby Cat by Takeuchi Seihō

I really like the Japanese style of painting and this watercolour of a tabby cat by Takeuchi Seihō . I like its precision and control. It shows a lot of discipline but combined with flair and artistry. It is the kind of mix that appeals to me. When you throw in a tabby cat you have me interested.

Takeuchi Seihō was a Japanese artist who lived between December 20, 1864 to August 23, 1942. His real name was Takeuchi Tsunekichi. But it was commonplace for Japanese artists to take up a pseudonym or art-name. Sometimes they changed their name several times to signify a change in their art development. I presume that it is still practiced. 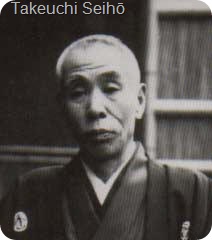 He was born in Kyoto and no doubt discovered his talent early on, loved to draw and wanted to be an artist. I wish my life had been so clear cut. It is great when you have a talent, recognise it and then make it your life’s work. Few of us have that advantage. He is is probably the best-known modern painter of Kyoto.

He generally painted animals and landscapes. He became a teacher at his own private school and a professor at what was to become the the Kyoto City University of Arts. A number of his pupils became well known artists in their own right.

The Emperor of Japan, personally, conferred on him the Order of Culture in 1937. He was one of the first to receive it. 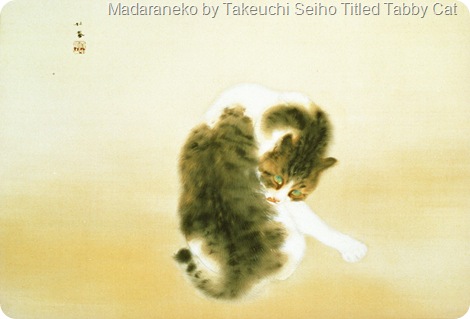 This is a spotted tabby and white cat. There is lots of white. The white is caused by the white spotting gene. The tail is short or partially hidden. I think that it is short. A lot of street cats in Asia have short tails as far as I am aware. It is certainly not uncommon. And of course, in Japan, the classic short tailed cat is the Japanese Bobtail, which is a refined version of a street, short tailed cat.

The picture flows in an “S” shape from the tip of the tail marked with a black spot to the head, with a very definite bold curve to the tabby pattern on the cat’s shoulders just over the left ear. And the left ear is quite sharply pointed to fit into the white area. The ears are pointed backwards. This cat is grooming itself but listening behind at the same time.  The right leg is in a very typical position for a cat that is grooming its flanks or back. The leg is balancing the cat and sometimes a cat extends its claw slightly to grab hold of something to aid balance.

There is no doubt in my mind that Takeuchi Seihō was a keen observer of animals and probably liked cats and their nuances of movement, balance and behaviour.

It has a soft focus feel about it, almost cloud like and quite modern despite being painted in 1924. It is Nihonga watercolor on washi paper. “Nihonga” means paintings that have been made in accordance with traditional Japanese artistic conventions, techniques and materials1. “Washi” is a type of paper made in Japan. The word is made up of wa which means Japanese and shi which means paper. It is a paper that is made by hand in the traditional manner2.

For the sake of completeness, here is an example of a landscape painting by Takeuchi Seihō: 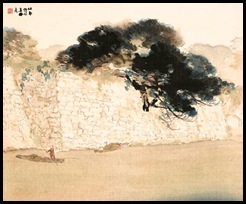 The painting of a Tabby Cat by Takeuchi Seihō is at Yamatane Art Museum, Tokyo.