I think I am going to have to speculate and use my imagination when writing about Pierre Bonnard’s Le Chat Blanc painted in 1894 as I can’t find anything on it! Pierre Bonnard was trained as a lawyer on his father’s insistence (that sort of thing happened quite a lot it seems).

He was born on 3 October 1867  and died on 23 January 1947. He had the advantage of the use of photography to help him as photography was well developed towards the latter part of his life. He did not paint from life apparently but would initially draw the subject, which was frequently of friends and family and interiors. I presume that the gardens and rooms were of  his residence, on many occasions. 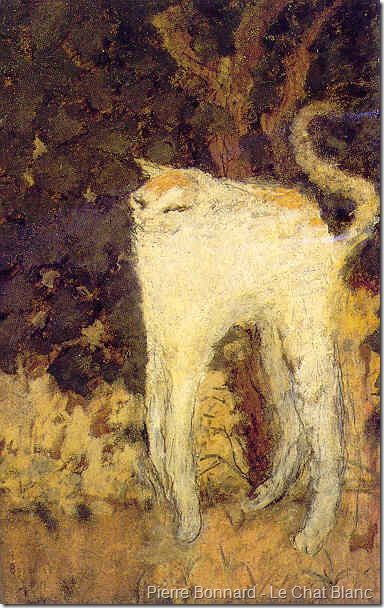 What about the white cat? Well, it is a bit strange although I like it a lot. The legs are very long and stiff. The cat seems to be a solid and white cat (the coat type) and was probably a random bred cat – a moggie.

I believe that this is his cat as I believe that it features in another painting of a room called: The Dining Room in the Country, 1913 (below). You can see a white cat at the bottom right of the painting, on the chair. 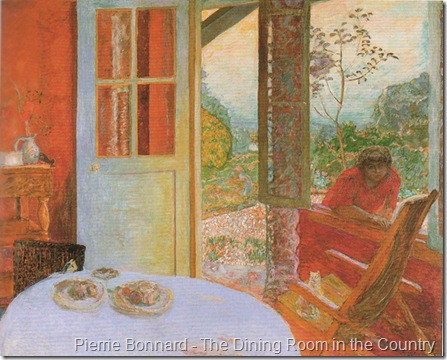 Apparently, in 1912, Mr Bonnard bought a country house called “My Caravan” at Vernonnet, a town on the Seine.  This painting shows the dining room in that house. There is more than one cat as far as I can see. The white cat, as mentioned, is on the chair by the window and there is a tabby and white cat on the dinning chair next to the food on the table ? guess what that cat was thinking. His wife, Marthe de Méligny, is the person in the picture. 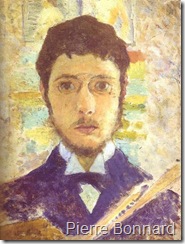 Pierre Bonnard would not be the first artist to like cats. They suit individuals and artists are usually (or must be) individuals.

Bonnard seemed to paint subjects to scale in an impressionistic manner so I am not sure why he painted Le Chat Blanc so very much out of scale and out of proportion.

I speculate that this is his cat in the defensive/aggressive mode, when a cat is trying to make itself look as large as possible. The arched back, standing high on the legs with the tail up and hair fluffed up indicate this.

The pictures are all in the public domain. The picture of Mr Bonnard is a self portrait (1889).

From Pierre Bonnard Le Chat Blanc to Cats in Paintings