BB was so sick when we first got her. The first thing we did was take her to the vet. She was so thin. She had swallowed a beetle and they had to surgically remove it (I still have what's left of the beetle in a glass tube).

While they were in there we went ahead and had her fixed. The vet commented that she was a bit aggressive. We later found out she was from a well established colony. For Halloween, I put this little hat on her and with the real stitches she fit the part of the mummy.

The next summer, BB and I were doing laundry from a camping trip and a spider jumped out of a sleeping bag. BB pounced on it and I knocked it off and killed it. BB's little face began to swell. My husband and I rushed her to the vet.

She had been bitten on her cheek by a Brown recluse spider, which has a venomous bite, which can kill living tissue leaving it necrotic: 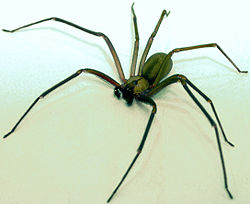 BB had to have an emergency surgery. When we were allowed to see her, they brought her out holding her by the back of the neck and she was drugged, hissing and fighting.

I quickly took her and put her under my chin. She licked my neck a few times and then settled on down.

BB hates the vet and doesn't understand they have saved her life twice. They must think I'm nuts to keep a feral cat in the house but she is so much better behaved at home.

She looks at me with so much love in her eyes. She's my baby!

I Love My Feral Cat BB

From The Mummy to Feral Cats