The Clouded Jack Cat is an experimental cat breed that was accepted or registered with The International Cat Association (TICA) in 2015. It is a three-way hybrid being a cross between the Savannah, Bengal and PixeBob. The first two are wildcat hybrids and the third is a standard domestic cat with a short tail created by selective breeding.

Clouded Jack cat Kashi after capture at the school he caused to be closed as they thought he might be a bobcat. Photo: screenshot from video.

The thing about the Clouded Jack is that it is an incredibly rare breed of cat. I had never heard of it until the recent news media story of a suspected bobcat which caused a school in Scranton, Pennsylvania to close.

The students were sent home out of an abundance of caution as they believed a bobcat was roaming around the school. Note: bobcats are frightened of people. They normally disappear and don’t attack. I suppose if cornered and defensively aggressive they could harm a child. But it would have been very unusual for a genuinely wild bobcat to be in the school. Too many people. Too much human noise.

The Clouded Jack cat is a pet and he was trapped and taken to an animal shelter where he was found to have a microchip. Their name is Kashi. He had been missing from his home for three months. He was reunited with his owner.

Game Warden Jon Bowman said that the Clouded Jack “looks identical, [has] the colors of a bobcat, [and] it’s missing a tail. So, it’s erring on the side of caution, we want to make sure all the students are safe and the staff are safe.”

The PixieBob is meant to look like a bobcat and some people ask if it is a domestic cat x bobcat cross. It is not. It is entirely domestic. It is a simulated bobcat! This is one reason why the Jack Cat resembles the America bobcat.

SOME MORE PAGES ON THE BOBCAT: 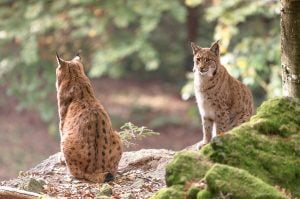 Average size of a bobcat in Michigan

I have some data on the average size of bobcats in the US state of Michigan but it is quite ...
Read More

People search for "Bobcat size compared to cat" but what they mean is a size comparison between the bobcat and ...
Read More

Here are five photographs showing the kind of places where bobcats make a den. Not long before birth the female ...
Read More

Average weight of a male bobcat

The average weight of male bobcats in Oklahoma, taken from a small sample, was 8.9 kilograms (females: 5.8 kg). In ...
Read More

Is it legal to own a bobcat in Texas?

The answer to the question in the title can be found in a Texas statute called: HEALTH AND SAFETY CODE ...
Read More
Please comment here using either Facebook or WordPress (when available).