The answer is yes but not always and there are antidotes if caught in time. Here is some detail from two perspectives (a) the type of poison and treatment and (b) remedies against the person laying the poison. There are various rat poisons. Perhaps the best known are anticoagulant rodenticides. These stop the blood from clotting. This is achieved by the poison blocking the synthesis of Vitamin K, which is required for normal blood clotting. Other rat poisons (or chemicals used in rat poisons) are sodium fluoroacetate (1080), strychnine, phosphorus, zinc phosphate.

Rat control programs should (possibly must under local legislation) provide notification of baiting programs to avoid the poison being accidentally ingested by people and pets (see picture). Where local legislation does not create an obligation to notify, animal cruelty laws may impose a general obligation under certain circumstances. 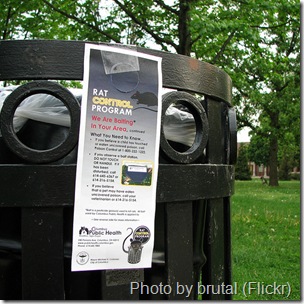 There are first and second generation types. I will presume today 2010 (Feb) that most are second generation. These are stronger. They require a single exposure to be fatal and a cat can be poisoned if it eats a rodent killed by the poison.  The poison remains in the cat’s system for a long time (up to one month).

There are no initial symptoms until the cat passes blood in stools or urine or bleeds from the nose. An internal haemorrhage kills the cat.

Treatment is: inducing vomiting, see a vet who will administer “fresh whole blood or frozen plasma”. Vitamin K, initially given by injection and then pills, is an antidote. 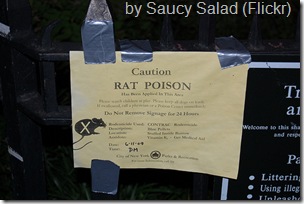 It can be mixed with rat feeds etc. A cat can be killed by eating a rat that has been killed by this poison.

The pellets are dyed purple, red or green. Symptoms of a cat being poisoned are unequivocal and rapid (within 2 hours): agitation, excitability followed by painful seizures (60 seconds), cat turns blue. A slight stimulation (e.g. clapping causes a seizure). Treatment: induced vomiting if the cat has not showed signs of laboured breathing. Take cat to vet immediately. Keep stimuli down.

A poisoned cat might have garlic breath. Other symptoms: vomiting and diarrhea followed later by cramps, pain in abdomen and convulsions leading to coma. Treatment: as for strychnine. No antidote.

Symptoms include: laboured breathing vomiting (with blood sometimes), convulsions, death. Treatment: as for strychnine. No antidote.

Remedies against person laying the poison

It would not be an offence to lay down rat poison as long as it was done in an appropriate manner and reasonable precautions were taken to prevent access by domestic animals. The photographs of the signs above demonstrate this. I think this is an important test. Are there signs warning of rat baiting? If not the person laying bait might be committing a crime.

If the person who was laying the poison was informed of the presence of cats in the area would this create a situation under which Section 4 (1)  of the Animal Welfare Act 2006 in the UK became effective? I am not sure.

However, if someone is laying down rat poison in a public place without precautions (i.e. carelessly), I would talk to them if they are known to you and/or photograph it (
for evidence), remove it and notify the police or RSPCA.  The Animal Welfare Act 2006 (in the UK) creates criminal offences.

From Will Rat Poison Kill A Cat to home page

Will Rat Poison Kill A Cat? -- Source on poisons: Book 1

Cat Poison, this is a disturbing page as there are a lot of comments by people who want to poison cats – disgusting.