This is the story of a serval with a mental health problem called pica, which is made all the more strange because the story comes from the magazine of the Feline Conservation Federation (FCF). FCF is a group of wild cat species experts and the articles in the magazine are often quite technical and written by wild cat specialists. They know a lot about wild cat species, or should do.

However, in this instance, the story is about a person adopting a serval kitten from a breeder that makes no attempt to analyze what went wrong, and it did go wrong. 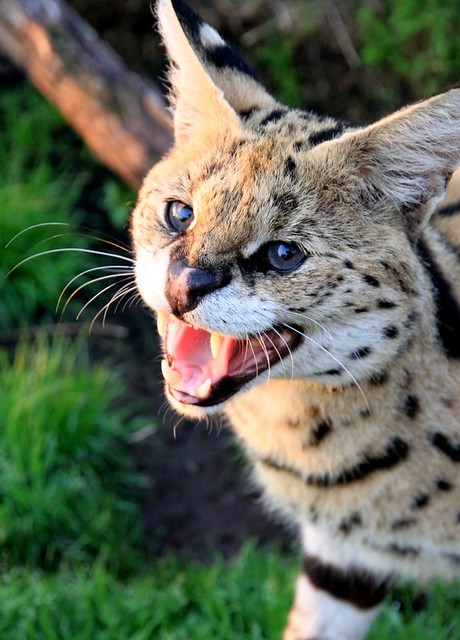 Let’s make it clear from the outset, adopting and caring for a seval is a massive undertaking and nearly always more onerous and challenging that expected by the person who has been smitten by this species of wild cat. The general advice is; don’t do it. Don’t think you can treat a serval as a domestic cat in your home. It is not like that. The adult serval can be quite large, the size of a large dog, and is a genuine wild cat. They behave like a wild cat. They can actually be quite intimidating and can frighten people.

This is the story of the adoption by Cheri Foster of a serval that was a few days old.

“This tiny serval kitten was only a few days old when it came home with her.”

She named the serval, Akai. It was love at first sight, we are told. This love was obviously one-sided and blind because no one should adopt a kitten, wild or domestic, that is a few days old and take her home. This is far too early. A kitten a few days old has not been weaned.  There are countless articles on the internet of cats suckling on people’s arms and ear lobes etc. Worse than that, cats that have been weaned too early sometimes progress from continually suckling inappropriately to eating non-food and non-digestable items such as wool and blankets. This disorder is referred to as pica….

“Akai developed behaviors that could be dangerous to her health, like eating blankets, pillows and furniture inside the foster home.”

Also Cheri had her serval declawed but had difficulty finding a suitably experienced vet. Not all vets have the experience to treat servals. Declawing is bad enough but it is commonplace with people who keep servals because, as stated, the serval is a medium sized, strong, wild cat with large paws and claws.

The vet who declawed her did not administer pain killers for almost two days. The reason? The vet was fearful of the cat. Shocking!

Litter training Akai took almost 12 months and the carpet was ruined. Surprised? No, servals spray urine all over the place and it is done with great efficiency just as one would expect of a wild cat.

You can imagine the stresses in both serval and human in this relationship. The sweet serval kitten had become a bit of a monster to her human owner. The mental health problem, pica, was so bad it broke up the relationship. Cheri rehomed her serval for the sake of them both, I suspect. Akai went to a place called the Conservator’s Center. When Akai was with Cheri she was a full-time indoor cat. She now appears to be in an outside enclosure with a covered den.

For me, this is a failure. Declawed and mentally damaged this serval ends up in an enclosure. To be honest I am surprised the FCF published this sad story in their magazine. It cannot be a good advertisement for the concept of captive wild cat conservation. Not that this experience has anything to do with conservation. It is all about human self-indulgence.