Social Play in the Domestic Cat

This article, Social Play in the Domestic Cat is based upon a research paper of the same title dated 1974 and prepared at the Department of Psychology, Cornell University, Ithaca, New York, 14850. The author was Meredith West. It was published on the Internet by Oxford Journals under the heading, Integrative and Comparative Biology. It is a purchased article.

Twenty-eight domestic cats were studied from between 12 weeks and 7 months of age over a 2 year period. Mothers were kept with young for the study. Several locations were used to reflect the range of living conditions under which the domestic cat usually lives. Fourteen kittens and mothers were studied in a laboratory. Fourteen were observed by the author (or “observer” – I have presumed this is the same person) in her home.The home was in a rural area and the cats were indoor/outdoor cats. Observations were made daily for 90 minute periods.

The cats were fed twice a day. The food included milk, cottage cheese and Purina canned and dry food. Comment: ordinary cows milk is not advisable for cats as it can cause diarrhea; perhaps is was specially prepared milk for cats. Purina animal test their products. So I am not sure that I agree with this part of the study! Feral cats were also observed to check (a) duration of parent to young relationship and (b) space used by mother & kittens. 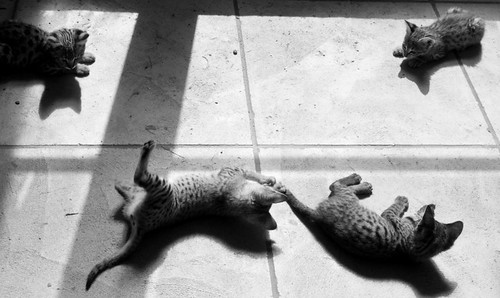 F1 and F2 Savannah Kittens playing at A1 Savannahs.

Eight categories of “motor patterns” were identified in regards to social play in the domestic cat. “Motor pattern” means: a particular sequence of muscle movements directed to accomplishing an external purpose1. Meredith says that these motor patterns are the “building blocks” of play. In other words individual types of play are a sequence of some of the motor patterns employed by two or more kittens.

Kitten lies on back; belly up. Limbs are in a “semi-vertical” position. Tail is straight back. Back legs are moved in a treading motion and the front legs make reaching or pawing movements that touch the kitten standing over it at the head, neck and ventral region (front or anterior of the cat). Mouth is open. Teeth are exposed.

This kitten stands “near or over another kitten”. The head is near the head and neck of the other kitten. This kitten may direct play bites at the kitten doing BU. The SU kitten may paw at the BU kitten. The SU and BU kittens alternate in their roles while playing.

This is classic position we see in some of the funny cat videos, where the cat sits up in the meerkat position but also raises its forelegs to perpendicular to its body (straight up). The kitten exercising the VO position will also put itself in the “bipedal position” (up on its hind legs). Although this might be relatively rare (my thought).

The kitten taking up the horizontal leap motor pattern stands to one side of the other kitten, arches its back slightly with its tail “curved upwards and towards its body.” It then leaps off the ground.

Head is low or touching the ground. Its back legs are tucked in and tail straight back. Its hind quarters are moved back and forth indicating a readiness to pounce. The kitten moves forward and pounces.

The FO kitten “sits near another kitten”. It hunches its body forwards. Its tail moves back and forth. One of its front paws is lifted and moved in the direction of the other kitten. Its eyes and head are also “orientated towards the other kitten”.  Two kittens exercise face-off against each other.

This is similar to HL. The kitten arches its back, curls tail upwards and walks sideways towards or around the other kitten or object.

One kitten chases another as expected.

Some of these motor patterns are, as mentioned, joined together in sequence. For instance the position or motor pattern that most commonly starts play is the pounce. The next most common starter or “first position” is the side-step and third is the stand-up.

As to middle positions of a sequence of positions, the most common is the belly-up and stand-up. As expected, by far the most common final position or action in play is the chase. The horizontal leap also concludes play often but much less often than the chase. To elaborate on that, at 6 weeks of age the play sequences began with a pounce 42% of the time, the side-step 20% of the time and the belly-up and stand-up 15% of the time. This means that four patterns initiated play sequence 90% of the time. At 12 weeks of age there was a difference. Pounces initiated play 37% of the time, stand-up 24%, belly-up 16%, stand-up 17%.

As to the number of patterns joined together in sequence when playing this depends on the age of the kitten:

The initiator of social play in the domestic cat (usually with a pounce) dictated to certain extent how the other kitten responded – usually with a belly-up or vertical stance if the initiation was with a pounce. The typical response to a belly-up was the stand-up (62% of the time for 6 week old kittens). Face-off was”seen in combination with belly-up or stand-up 47% of the time”.

The eight motor patterns were first used at different ages:

Frequency of social play in the domestic cat varied with age per the chart below from which it can be seen that about 12 weeks of age is the time when play occurs most (almost 60% of the observed time).

There were three or four daily play periods. They occurred at about 7:30 am, 1 pm, 6 pm and 10:30 pm. The duration of play sessions increased with age:

The amount of time spent sleeping also changed with age:

The amount if time spent on “quiet alert” also depended on the kitten’s age:

It was noted that the mother of the feral kittens left them alone fend for themselves at 4 months of age. Prior to leaving her kittens they accompanied her when she went to find food. Most often the mother found food alone, however.

The author of Social Play in the Domestic Cat, Meredith West concludes:

From  Social Play in the Domestic Cat to Cat Behavior