The description “African-Asian wildcat” describes two subspecies of wild cat whose combined distribution is from the southernmost tip of the African continent, through the Middle East and East towards a region north and east of India in a wide arch. Part of the reason why they are described together is because there is a dispute about classifying the various subspecies of the wildcat. It’s an ongoing discussion. These two subspecies can be treated in the same way in terms of their behaviour and how they live. Their scientific names are: Felis silvestris lybica and Felis silvestris ornata respectively. In India and Pakistan the Asian wildcat is called the desert cat although it does not inhabit true desert. The coat becomes more a shade of sandy yellow marked with small dots that tend to be in vertical lines. Today, the news media are reporting on a sighting of an Indian desert cat as they describe it. A photograph was not taken. Clearly the animal is rare in that country otherwise they wouldn’t have reported it (Dec 20, 2021). It was spotted for the first time in Madhya Pradesh’s Panna Tiger Reserve (PTR).

Note about the picture above. The strange aspect of this picture is that both ears have been ear-tipped i.e. the tops have been trimmed off. This is not explained. It may be to identify the cat to conservationist. The wildcats often inhabit areas near settlements and sometimes they crossbreed with domestic cats creating hybrids. I suspect that this individual cat has been ear-tipped by conservationists but that is a guess.

The African-Asian wildcat is well known as the ancestor of the domestic cat. This species of wildcat often lives close to human settlements resulting in semi-domestication and cross breeding with domestic cats. That state of affairs appears to have been going on for 10,000 years and more. Evidence of first domestication dates from about 9,500 years ago. In the chart below the African wildcat is referred to as the “Near Eastern” wildcat.

The Asian-African wildcat looks like a tabby domestic cat. The boundary is blurred by the presence of hybrid cats. The legs of the wildcat are longer than those of the domestic cat which is particularly apparent when the cat is sitting upright. It is suggested that the bronze statutes from ancient Egypt show this vertical siting position. The long legs also affect the cat’s gait. It walks like the long-legged cheetah or serval rather than the domestic cat. 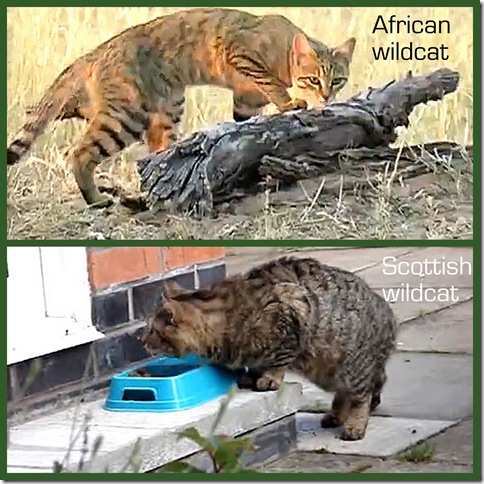 This is a slender cat. It weighs between 4-6 kgs; males being larger than females. The fur is short. The European wildcat is more stocky and has longer fur. The Scottish wildcat in the picture above is a European wildcat. The difference is clear in the montage.

The cat’s coat mirrors its location and habitat. In more arid Pakistan it is a pale sandy yellow and in Africa the color is grayish to reddish. The tail has a black tip.

The best way to show this is on a map.

You can see that modern taxonomy has decided that the African wildcat resides in the African continent above the equator and in the Saudi Arabian peninsular together with that conglomerate of countries to its north east (marked blue).

Due to the very wide distribution of the African-Asian wildcat we can expect a similarly wide range of habitats at differing altitudes above sea level. In African the wildcat is found to 3,000 meters above sea level.

Wildcats, like most other wild cat species (c.f. sand cat), need access to water through watercourses or at least about 4 inches of mean annual rainfall.

Examples of African-Asian wildcat habitat is as follows:

The wildcat lives side by side (sympatrically) with other wildcats and carnivores. The wildcats of the world map I created shows the list of wildcats in each country.

We have seen our domestic cats hunt. The same applies to the African-Asian wildcat. They are ground hunters/dwellers but good climbers. They are nocturnal hunters starting after sunset. The classic style is to approach as closely as possible using available cover and to pounce striking with claw and teeth. Sometimes, relatively rarely, the African wildcat hunts in groups

The African and Asian wildcats are adaptable in terms of prey selection.

The IUCN Red List™ classifies this wild cat species as Least Concern with decreasing population due mainly to hybridization, road kill, human persecution, poisoning of the prey of the wildcat (Chinese desert/mountain cat) this leads to the poisoning of the cat and a loss of prey, habitat loss and trade in skins.

As you can see Least Concern is a classification in terms of survival in the wild that says that there are currently (2012) little concerns in this regard.