This page is an attempt to clarify what the Angora cat is!

Have you been confused about the meaning of “Angora Cat” and the other cat fancy terms that overlap with and surround this term? Well I have and I still might be, but this is an attempt to clear things up. The cat in the painting above, dated 1761, is interesting as it shows an Angora that has the appearance of a traditional Persian cat.

Although the term is currently (2010) and occasionally used to describe the British Angora, there is a confusing history.

Here is an extract from a book dated 1834, which talks about the Angora. I find it interesting. 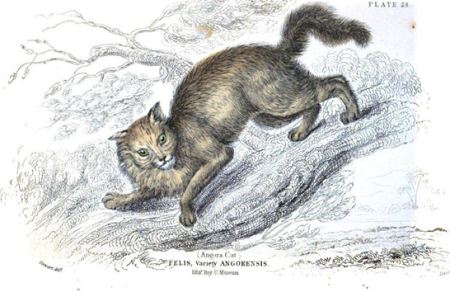 In the mid-19th century, cat lovers (not yet really cat fanciers it would seem) began to distinguish between the Turkish Angora and other cats with long hair that came from Persia (i.e. the Persian cat) and Russia (Russian Angoras – see below). It would also seem that authors of that time would refer to the Turkish Angora as the “Angora”. When they wrote of the Angora cat they referred to a cat that was long haired and different to the Persian cat breed.

Jean Bungartz in his book Housecats, Their Races and Varieties, describes the Persian cat as “a modification of the Angora cat, their hair is somewhat more woollier and curlier, but nevertheless still especially long..” The Persian does have a thicker coat than the Turkish Angora. However, the difference then (in 1896, the early years of the cat fancy) between these two long haired cats would seem to have been finer than today. There is now a stark difference probably mainly due to developing a cobby roundness in the Persian and leaving the Turkish Angora more normal in appearance. By the early 1900s the Persian cat had replaced the Angora cat. There were also Angoras that originated in Russia. In other words, this long haired cat was not confined to the boundaries of countries, why should it be?

As mentioned, although the Turkish Angora is now a well established cat with a very long history going back to the 14th century (see Cat History Timeline), in the middle of the 20th century (1950s) they were introduced into the UK having become “extinct” (src: Sarah Hartwell).

In and around the 1960s in the UK we had, then, a fairly clear situation regarding the term “Angora cat”. It meant, as I understand it, the Turkish Angora. However, a cat breed that was named “The Angora” was developed in Britain (UK) by Maureen Silson at this time. She mated a Sorrel colored Abyssinian to a Seal Point Siamese cat (presumed Modern Siamese) in the mid 1960s. The objective was to produce a cat like the Siamese with ticked points (see Agouti ticked coat

Clearing up the Confusion?

Obviously, as the British Angora was a kind of Turkish Angora but not the real thing and because its name caused confusion the breed was renamed the Oriental Longhair in the UK. 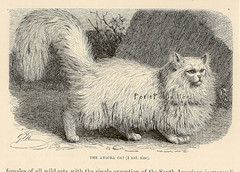 As I understand the current situation, the term “Angora cat” applies to the Turkish Angora and has no real use other than that, although there are vestiges of its former use from times gone by, which raise their head occasionally, as is the case for the British Angora, which is now renamed the Oriental Longhair. At the beginning of the cat fancy (late 1800s and early 1900s) the term was used to mean a long haired cat. Why not read about the cat fancy mashup?

From Angora cat to Home Page

Picture of Angora cat in painting is from Wikimedia Commons library.This image (or other media file) is in the public domain because its copyright has expired. This applies to the United States, Canada, the European Union and those countries with a copyright term of life of the author plus 70 years. Published under Wikimedia® creative commons license license = Attribution-ShareAlike License
Please comment here using either Facebook or WordPress (when available).