Jean-Honoré Fragonard Le Chat Angora. This is a painting of a white Angora cat with a lady and in the centre is a large mirrored globe. The globe reflects the cat and other people in the room who are not directly in the painting (see the second enlarged image). It was painted in the 1780s. Jean-Honoré Fragonard lived from 5 April 1732 to 22 August 1806. The painting originally formed part of a pendant with a painting of a dog, a spaniel. It is the cat that interests me and why I am writing about the painting. 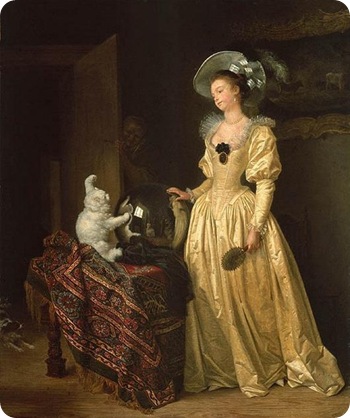 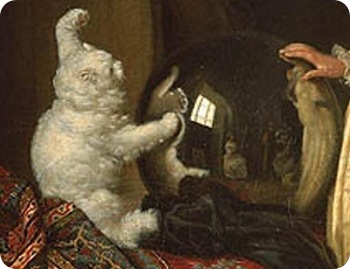 Jean-Honoré Fragonard was a talented Frenchman who painted in the late Rococo style; one that is decorative and ornate. It is considered art but it almost seems to be a form of commercial art rather than true art.

The subject matter is a very artificial situation. An incongruous mix of an attractive women dressed to the nines (well dressed), a large mirrored ball and a white cat that looks like a teddy bear who is waving. Mr Fragonard liked cats, reflective surfaces and attractive ladies and he threw them together to make a decorative picture! I agree I am being a bit unkind in saying that.

The Angora cat’s position is one that would be fleeting in real life. This must have been painted from memory by Mr Fragonard. It is probable that the cat was his companion and that in playing with the cat he had memorized this piece of frozen play action. This is because this cat featured in more than one of his paintings. A that time photography existed but exposure times were very long and it was impossible to capture action to aid artists.

The Angora cat is well known but I find its history confusing. Essentially, the term was used to describe a long haired cat of the era, which was a good 100 years before the creation of the cat show and cat fancy. Domestic cats were abundant then, but there were no formal purebred cats. People lived with moggies.

The Angora at that time, however, was a glamorous looking cat with long hair (but shorter than the long hair of today) and possibly the precursor of the now well known Persian cat. The term “Angora cat” could also describe the Turkish Angora and at that time the Turkish Angora was not, I would say, the rather elegant refined show cat it is today but a normal looking cat with long hair from Turkey. At that time the Persian cat when it came about was a modified Angora with curlier hair, it seems. It is a little confusing, the use of terminology, I mean. I discuss the Angora cat in some detail on this page: Angora Cat. 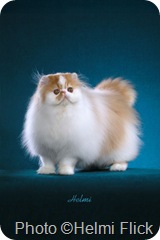 The modern Persian (see picture right) is very far removed from the Angora cat in this painting. The contemporary Persian in America has very long straight hair (the hair of the cat in the painting is curly and shorter) and the face flattened through years of deliberate breeding creating an unnatural appearance. The Angora cat in this painting looks somewhat like the Selkirk Rex, I’d say. Or a slightly curly coated doll faced Persian (traditional Persian cat). Also see please: Yeri Traditional Persian Cat (he is white too)

To recap, as I understand it, at the time this painting was made the term “Angora cat” simply described a long haired cat and white seemed to have been the favourite colour as Angora cats at that time were frequently (or exclusively?) white (see cat coats white). This might imply that people were breeding cats at the time despite being well before the cat fancy.

The cat in Jean-Honoré Fragonard Le Chat Angora, is given a central role when most often at this time cats were on the sidelines decorating the picture.

Jean-Honoré Fragonard Le Chat Angora – Photos: The picture of the painting is in the public domain as copyright has expired.

From Jean-Honoré Fragonard Le Chat Angora to Cats in Paintings