In one respect Styrofoam feral cat shelters are an excellent idea because its a way of reusing discarded coolers. Discarded Styrofoam coolers are easy to turn into insulated, warm and effective feral cat shelters. You’ll find videos on how to do it and I remember one rescue organisation building many of them and they were rightly proud of what they had done. 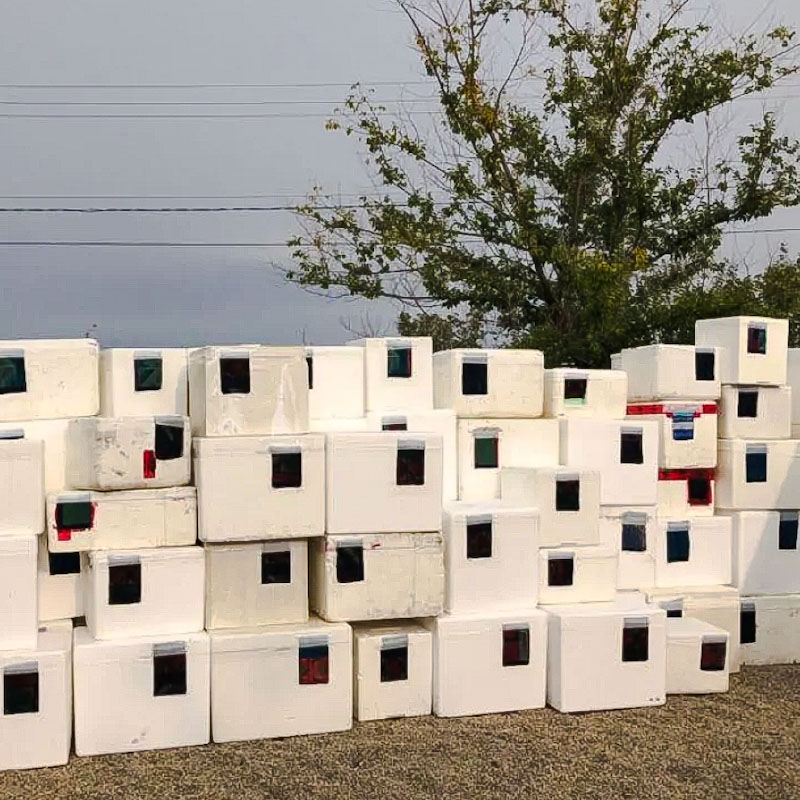 In another respect there may be a problem but before I describe it, I would like to say that I don’t think it is a problem which should stop people creating feral cat shelters out of Styrofoam coolers. I am just flagging up a potential health issue with Styrofoam.

Styrofoam is also known as expanded polystyrene foam. My research tells me that polystyrene is a synthetic aromatic hydrocarbon polymer! Polystyrene contains toxic substances: styrene and benzene. These are suspected carcinogens and neurotoxins, considered to be hazardous to humans. The question is under what conditions are these toxins released? We do know that when it is heated Styrofoam releases the chemicals. For example, polystyrene cups seem to be a bad idea because if you put hot liquid into the cup the chemicals leach out into the liquid.

One source (Collier County, Florida, USA) tells me that Styrofoam emits harmful air pollutants when exposed to sunlight. It is susceptible to ultraviolet light degradation. This is in reference to Styrofoam containers being thrown away on landfill sites where they pollute the environment. It is said it takes 500 years to biodegrade and is a major environmental problem in landfills in America where there’s approximately 1,369 tons of it.

In addition to the possibility of it emitting a toxic chemical into the air when hot, if it’s scratched and pieces are chipped off it’s conceivable that a cat could eat it. I would think, however, that this risk is very low.

The United States Environmental Protection Agency (EPA) state “that such materials can also have serious impacts on human health, wildlife, the aquatic environment and the economy”. There is an issue, here, which is that Styrofoam, in general, is a problem in terms of protecting the environment. It’s not good to have the stuff in the environment.

I need to arrive at my personal conclusion about using Styrofoam coolers as feral cat shelters. It’s a balancing act like pretty well everything is in life. There are upsides and downsides. On balance I have to conclude that Styrofoam coolers are a good idea in terms of being beneficial to the lives of feral cats by turning them into shelters as seen in the video. It’s just worth remembering that there are potential problems. For example, in the video you see the woman covering the cooler with black plastic sheeting perhaps made out of waste bags. That’s going to absorb sunlight which may heat up the container in warm weather. This may result in pollutants building up inside the container as it is an enclosed space. This may be harmful to a cat inside. Once again, I stress that I’m just thinking, as I write, looking at potential issues concerning the health of cats using this shelter.

I think that it is worth reminding ourselves how wild feral cats can be. This video does that. It also ...
Read More

This is a difficult photograph to look at for animal advocates because what we see is a large group of ...
Read More

What should you do if you have feral cats at the bottom of your garden?

I think the first thing that you should do is to make sure that they are feral cats. They might ...
Read More

Disneyland's attitude towards feral cats at their Anaheim, California theme park attraction is the gold standard for how businesses should ...
Read More

DEIRA, DUBAI - NEWS AND COMMENT: Zana Ismail is a cat lover who runs his own shipping company in Dubai ...
Read More

Cat hoarding up and feral cat numbers up USA

I am going to combine two news items in this post. One comes from PETA and the other from news ...
Read More

Home-made cat shelters should not be too big

This is something which has occurred to me for some time. My thoughts have been renewed by the stories of ...
Read More