I am writing about the domestic Asian cat group not the various wild cats in Asia such as the Asian leopard cat, the wild cat parent of the Bengal cat. Am I correct in saying the Asian cat group is the only group of cats of its kind in the entire cat fancy? To me it seems a slightly confusing group but a good comment might rectify that view. In any case it is founded upon, as I understand it, the Burmilla, which in turn has a Burmese cat as one of its parents. And for that reason the Asian is a breed of cat that is similar to the Burmese with the exception that as a group it encompasses a wide range of coat patterns and types. It also seems to be an amalgam of two different breeds and three fundamental coat type variations (wrong – please leave a comment).

Started in Britain in the early 1980s by Baroness Miranda von Kirchberg in respect of the Burmilla, the Asian shorthairs include four types:

Asian Self which includes a breed called the Bombay, a jet black cat that is bred to resemble a miniature black panther (of sorts). The Bombay is called a ‘black Asian self’. It is one of sub group of Asian self cats. The word, ‘self’ means, ‘a cat whose parents are of the same solid colour’1.

The Bombay (right) is a Burmese type cat understandably. The USA Bombay is different to the UK Bombay (read more on the Bombay cat page). There are 13 colours in the sub grouping including caramel, apricot and caramel Tortie. In the USA there is only the black Bombay2.

Asian Tabby which includes the three types of tabby cat coat: classic (blotched), mackerel and spotted patterns. The spotted comes mainly from the Chinchilla and the ticked pattern (the Abyssinian is the best known cat with this pattern) from the Burmese breed. Most Asian tabbies have ticked patterns, because almost all Burmese cats in the UK are homozygous for this pattern.

Asian Smoke – At the time of writing I don’t know the breeding program to produce the smoke variety of the Asian cat because the Asian Group Cat Society doesn’t tell me! However, the smoke cat coat is one in which the top part of the hair strands are dark while the lower part is light. I discuss this and the genetics in respect of Maine Coons on this page: Black Smoke Maine Coon Cat

Burmilla – this is a cat that I have already written about. It is the original Asian variety started in 1981 and the cat has a shaded coat3. Read about this cat here: Burmilla cat.

To which the longhairs can be added: 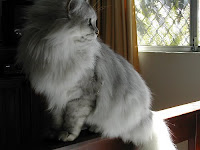 Tiffanies which are semi-longhaired cats of the Asian cat group. A recessive gene produces the long hair which makes breeding much harder. These cats have quieter personalities than the shorthairs4. You might like to read about the rather confusing naming of a group of cats across the world that includes the Tiffanie on this page.

Asians are grouped in the foreign section at cat shows.

Photo of Tiffanie cat by wiccked

From Asian Cat to Burmese cat