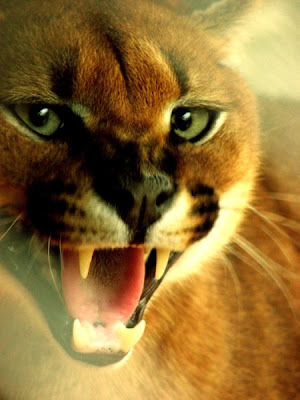 This is the cat that features in the well known phrase, ‘to put the cat amongst the pigeons’. This harks back the era of Indian princes and maharajahs who, it is said, kept cheetahs and caracals as hunting animals. I have already written an article on hunting with cheetahs. Cheetahs are relatively friendly and trainable. This cat is described as fiercely territorial5 and sulky and irritable6 in confinement. They are also described as ‘easily tamed’ and adaptable to living with humans18, which supports the view that they were used as hunters by people. In the USA, some people today – 2010 – do keep them as cat companions.

Although they were used to entertain the wealthy of India by keeping them to hunt small game, the extract below from: The Naturalist’s Library, I. Mammalia, Volume 2 By William Jardine dated 1834, indicates that there was little evidence of it at that time. However, when ‘taken young’ and reared by people and therefore socialised it can be trained. One pastime was employing tame caracals to catch pigeons, as many as possible, while they were on the ground feeding. Apparently a skillful caracal could kill almost a dozen before the rest flew off. A caracal amongst pigeons caused panic and chaos amongst the birds, hence the expression, ‘cat among the pigeons’2.

This cat is or was known as the lynx or caracal lynx but is in no way a lynx. The lynx lives in colder climates than this cat species3 and the caracal has longer legs and a slimmer appearance than the lynx5. Studies have separated the caracal and lynx in terms of scientific classification. Most recent studies using DNA profiling have concluded that it is closest to the African golden cat Caracal aurata and serval Leptailurus serval20.

This slender cat of medium size is known, perhapsfor two major attributes (a) its long, black, ear tufts at the tip of its ears and (b) its ability to leap vertically from a standing position to a height of about 3 metres and more12 to catch birds in flight1.

A visitor and welcome contributor to this site has been involved with caracals. See her post here: Living With And Understanding Servals And Caracals.

Is it legal to own a caracal in Georgia?

Are caracals legal in Ohio?

Is it legal to own a caracal or other small wild cat in Illinois?

The scientific name is: Caracal caracal (Schreber 1776). The word, ‘caracal’ is believed to be derived from Turkish. It is the only member of the genus Caracal19.

I include two images, one from a bygone age, while the other is current. This cat is relatively slender (foreign type in cat fancy language, incidentally). It is a medium sized cat weighing in the order of 8 – 20 kg1. Males typically weigh 13–18 kg (28–40 lb), while females weigh about 11 kg (24 lb)14. 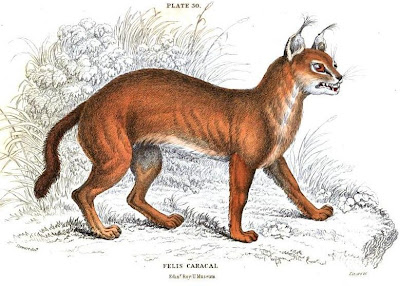 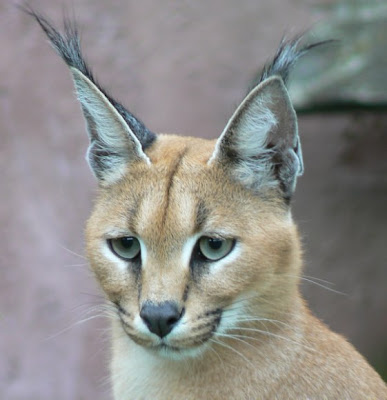 The muscular hind legs are longer than the forelegs. The hind legs give it the ability to jump so spectacularly. This cat can sprint short distances at a speed similar to the serval at 50 mph but is more sturdy in appearance than the serval5 (the serval has the longest legs to body size of all the wildcats).

The ears are tall and rectangular with the legendary long black ear tufts. The back of the ear flaps are black.  This cat is from 65 to about 90 cm in length or 2 to 3 feet, to which can be added a relatively short tail of 30 cm, about 12 inches.

The body color is ‘tawny grey, reddish, frosted sand color’1. The body colour is rather plain while the facial markings are strong and beautiful.

The cat’s general expression is described as ‘aloof’, ‘stern’ and even cruel. However these are human interpretations of the way the face is built and do not, I believe, reflect the true nature of this cat. In the photograph above the cat seems to be quietly smiling. The low upper eyelids designed to protect the eyes from the sun may give an impression of cruelty1.

Date: Feb 2012: Below is the most up to date range or distribution of the caracal7.

In the most authoritative work on wildcats published in 20021, the range was considerably more extensive and it included, North Africa (the Barbary coast), Saudia Arabia and into the Russian satellite states and Pakistan and India. Specifically the countries where it was or is found as at 2002 and where the cat is ‘native’ are listed below9. Native means where the cat historically is found.


Its range mirrors that of the cheetah9. The IUCN Red List say that it is widely distributed across Africa (as the map above shows) and in Central Asia, and South-West Asia into India. These other locations are not set out on their map. This must indicate that the status of the caracal in these areas is uncertain and/or the distribution unknown or unclear as at 2010.

This species prefers an open landscape and they seem to prefer what is described as ‘edge habitats’, meaning land that is at the edge of forests and open grassland10. This allows
for cover.

Preferences vary according to location1.

They share habitats with animals that can prey on it, such as:

They hunt mainly at night and on the ground notwithstanding the fact that they are adept climbers. They are good at hiding on the ground due to their colour. Defensive behavior consists of climbing to higher ground and concealment there. Where higher ground is unavailable it will lie flat on the ground, motionless.

It is nearly always a solitary hunter. The video above shows how this cat kills quails – spectacularly at the conclusion and slowly and stealthily at the beginning. This cat is patient when needed, waiting a long time before the attacking dash. Its speed is superior to most same sized cats. This cat will also prey on animals two to three times its size which is also a superior feat to most similarly sized cats1. Prey includes the following1:

The throat bite is positioned at the, ‘junction of the lower jaw and neck’15.

Generally, prey is small at less than 5 kg.  However in studies in the Mountain Zebra National Park between 62% and 72% of prey was between 2 and 3 times the weight of the caracal21.

In quiet areas prey is covered with grass to hide it and to allow time to finish eating it.

Here are some photos of some prey:

This is carried out in typical fashion with uncovered feces, urine spraying (rocks and bushes etc.) and raking the ground with the claws of their hind paws15.

The usual range of sounds are produced including:

These are marked out from the ordinary by the outstanding ear tufts. Their function is said to be unknown although people have speculated. Are they a ‘decorative signalling structure’?26

The ear flaps are large, reminding me of the serval’s ears. These are effective
for listening to prey on the ground in the long grass.

Here is some detail in a readily accessible table. I know people like speed on the internet.

There are many protected areas within the caracal range

Asian range: Listed in CITES Appendix I. See CITES in relation to cats.

Hunting is banned in:

In sub-Saharan Africa in about half of its range hunting is prohibited. I don’t know the specific areas.

1. Wild Cats of the World by the Sunquists (for reproduction and development reference to pages 42 and 43)

3. A System of natural history: containing scientific and popular descriptions …1834

4. D.L. Drake-Brockman (1909), Volume 1 of District Gazetteers of the United Provinces of Agra and Oudh, Government Press, United Provinces, India, http://books.google.com/books?id=-zJuAAAAMAAJ, “… The caracal (felia caracal) or syahgosh is also found in the Dun …“

6. The Naturalist’s Library, I. Mammalia, Volume 2 By William Jardine dated 1834

12. Smithers RHN 1966 The mammals of Rhodesia, Zambia and Malawi

16. Weisben Y & Mendelssohn 1990 The biology and ecology of the caracal Felis caracal in the northern Aravah Valley of Israel.

24. Moolman LC 1986 Aspects of the ecology and behavior of the caracal..

25. Stuart CT and Wilson VJ The cats of Southern Africa.

From Caracal to Wild Cat Species