When a cat eats a bird it will sometimes pluck the bird’s feathers beforehand. That, though, is a simplistic statement because it seems that it is more complicated than that. The same or very similar methods are employed by both domestic and wild cats. This is no surprise because a domestic cat behaves like a wild cat once it is out of the back door! The wild is definitely in him/her. The urge to pluck the feathers of a bird caught as prey is hard wired in all cats.

When the bird is small, a cat will put up with the feathers and eat the lot except the wing feathers (primary feathers) and tail. Also sometimes the beak and gall bladder are left. The beak is hard and the gall bladder bitter.

Bird feathers, then, are not a part of prey that provides nutrition to the cat (although they may provide some roughage). When a domestic cat eats a bird the size of a thrushes and blackbirds (see below – photo by by innpictime) they are partially plucked before starting to eat and then plucked piecemeal as feeding progresses. In other words it is not done systematically. Bigger birds are plucked more systematically before starting to feed. 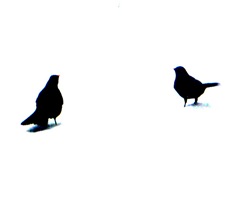 However the plucking mannerisms of the wildcats varies substantially. The first point worth making about the wild cats in this respect is that the wildcats in the Americas use a different technique to those from Asia! In the Americas the cat pulls the feathers off in a vertical straight line movement while in Asia a zigzag movement is employed. Why is that, I ask? Well I am going to guess that one reason is that the birds that are preyed upon in Asia by the smaller wild cats have feathers that are more firmly fixed. The zigzag action would undoubtedly be more efficient. It may simply be that the birds are on average bigger. Bigger birds may have feathers that are held in place more firmly. Or it may be that the observations were misleading. Larger feathers may have been removed with the more efficient technique while the smaller ones simply tugged out.

Secondly, wildcats species vary in their plucking habits. The chart below describes some of the techniques employed by a selection of wild cats:

When a domestic cat eats a bird the feathers can get caught up on the tongue and in the mouth. In order to remove them the cat will shake its head. It might also spit and make licking movements to remove stubborn feathers from its mouth. The cat might also lick its fur. The feathers stuck on its tongue will then come off.

One last point. A number of people think that feral cats slaughter untold numbers of birds. The truth is we don’t really know how many and the cat should not be persecuted as a result. Furthermore it is entirely natural. We need to ask what we can do about our behaviour to reduce the incidences of abandoned and unneutered cats. We need to get a handle on this. See: How Feral Cats Affect Wildlife.

Cat eats a bird – Photos: published under a Attribution-NonCommercial-NoDerivs creative commons License — this site is for charitable purposes in funding cat rescue.