OVERVIEW: We are all aware of the cat’s athletic abilities, their balance and power, which is usually demonstrated in jumping and climbing. The cat’s muscles work in conjunction with its highly specialised skeleton to create this effortless athleticism. However, it does depend upon its fast-acting muscles. The domestic cat’s muscular-skeletal framework has evolved to make it an efficient hunter and to escape from danger expediently. The cat has a great combination of power, flexibility and balance.

The caracal is the world champion vertical leaper in the world of cats. Photo in public domain (deemed).

Feline muscles are inherently more flexible than most other mammals which allow a greater range of movement. Remember that muscles can only contract. That means muscles work in opposing actions. The muscles that control the internal organs are involuntary while those that control, for example, the limbs are voluntary as dictated by the brain and the nervous system.

The involuntary muscles are smooth or non-striated (as they appear under a microscope) while the rest of the body’s muscles are called striated or striped.

Each individual muscle consists of many muscle fibres. They are held together as a group by connective tissue. The cat’s muscles mainly consist of fast-twitch fatiguing cells. It is these which give the domestic cat its speed and its ability to leap several times their own length in a single bound. We know they are great sprinters and accelerators. They can reach about 30 mph in a few seconds.

But, of course, they tire quickly. Therefore, the cat is not a long-distance runner like the dog; but much more a sprinter. The cat has very few fast-twitch fatigue-resistant cells which is what they need for endurance. The cat’s body temperature rises after less than a minute of sprinting. They have to stop and pant to cool down. The cheetah is the classic exponent of this because although they can do up to 70 mph, they can only attain that speed for about 400 m as a maximum before they become thoroughly overheated.

The domestic cat’s stealth when stalking prey is made possible through their slow-twitch muscles which produce slow, sustainable contractions.

Sphynx cat with big muscles due to a genetic mutation. Picture: Reddit.

This is due to a combination of its specialised skeleton and its powerful and fast acting muscles. This musculo-skeletal combination has evolved for survival, enabling skillful hunting and escape.

There are three muscle types and three types of muscle cell within muscle tissue3. 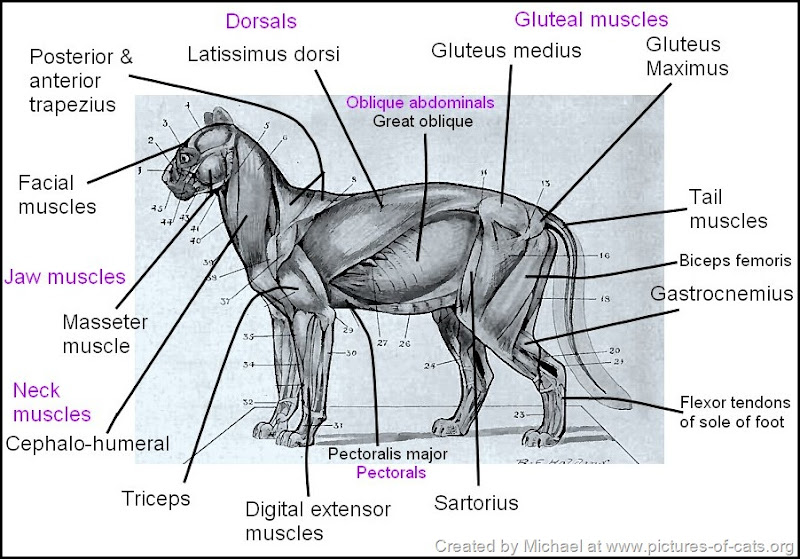 Some descriptions of what the cat muscles due starting top left going clockwise, in the drawing above:

RELATED ARTICLE: Reason why dogs have facial expressions and cats hardly do.

Code to above numbered cat muscles, tendons and some veins including some of those as indicated:

Here are some more images of cat muscles. These are from Biology Corner1 a teaching aid site. This page is intended to be for the same purpose.

Cat’s muscles are as expected mainly made up of fast-twitch fatiguing cells – hence the cat’s speed (30 mph max for domestic cat and 64 mph for cheetah) and ability to jump up to six times its length. When sprinting a cat generates a lot of heat and pants within a short time. The slow-twitch muscles are used for slow stalking, almost slow motion walking when approaching prey.

Cats have flexible muscles and they are mainly attached to either side of the joints of bones to articulate them, which is achieved by the muscle contracting. Muscles often act against each other, e.g. one extending a limb and the other contracting it3. Muscles can only contract.

RELATED: Do cats have more muscles than humans?

The large image is free to use under an Attribution-Non-Commercial-No Derivative Works 2.0 Generic creative commons license. Please credit Michael Broad of Pictures of cats org.

1. http://www.biologycorner.com/anatomy/muscles/cat_muscles_lab_guide.html – permission if granted if these images are used as teaching aids.

3. The Encyclopedia Of The Cat by Dr. Bruce Fogle