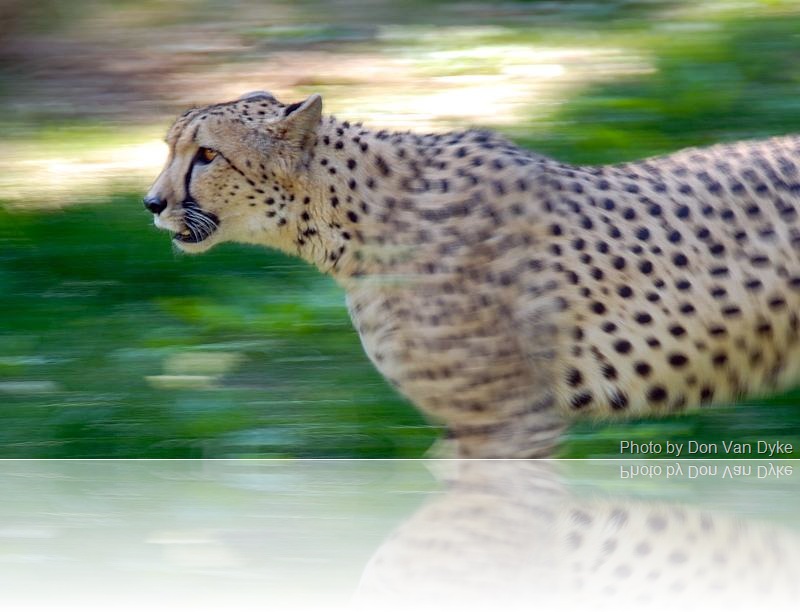 In this article about cheetah speed, I have used as a primary source of information, an academic research paper published in the Journal of Mammalogy 1959. This paper compares the running methods of the cheetah to the horse. Although I have not referred to all of this paper. The horse is a useful benchmark as it is an animal well known for speed and endurance. In an update, I have also referred to a research document, Timed running speed of a cheetah by N.C.C. Sharp. Access to the document was purchased from Wiley InterScience Pay-Per-View. I discuss this research below.

A comparison therefore enlightens us as to how the cheetah is able to run so fast, the fastest of all land animals currently. The figures for humans also a serve a useful purpose in making a comparison we can relate to. The horse has evolved to be a very efficient runner, being able to run fast and for long distances. The cheetah has evolved to be the best at the short dash. A comparison of horse, man and cheetah (and others animals) in terms of speed and distance is helpful in assessing the cheetah (of all these records perhaps the most remarkable is that of the humble Ass):


We know that the cheetah is built for speed and her survival is dependent on this gift. That is why she lets other large predators steal her food rather than fight for it, as it avoids injury. It is more efficient to chase and kill again. Apparently over a 2.5 mile chase in 1938 two mongrel dogs brought a cheetah to bay. The cheetah rarely runs more than a quarter mile. It’s all about cheetah speed.

The length of stride of the cheetah is a great asset in achieving speed as cheetah speed is a product of increased stride length and rate. The length of stride varies with speed and performance. Although the cheetah is a fraction of the size of a horse she covers the same amount of ground in each stride, about 20-25 feet per stride (max about 28 feet for the cheetah). Relative to the size of the animal (measured by shoulder height) the cheetah stride is about twice that of the horse. The horse completes 2.25 strides per second at 35 mph. The Cheetah completes 2.5 strides per second at 45 mph using the “rotary gallop”. There is (a) a greater period of suspension of the body and (b) two principle suspension periods, in the stride compared to the horse.

Cheetah speed – Reproduced under the terms of a license by www.jstor.org

Cheetah speed is also dramatically enhanced by the role of the back – a major factor. Like other carnivores the cheetah flexes and extends the spine when running. This flexible spine is more noticeable in some domestic cats, particularly the wild cat hybrids such as the Savannah (new window). It can also be seen in the rare Sokoke (new window). The Bengal is a fast runner, another wild cat hybrid. In contrast the horse has to hold the back almost rigid as this makes the horse’s running action more efficient leading to greater endurance (see the statistic for the Mongolian Wild Ass above, for example).

Between the horse and the Cheetah there is a 70° difference in the angle that the scapula makes with the pelvis during running. In the cheetah it is 130° and in the horse it is 60°. The large difference is due the difference in flexibility of the spine. The scapula is the shoulder blade and is indicated in the drawings above. It is near the neck and shoulder of the horse and cheetah. The cheetah is a cursorial animal (adapted to run). What advantage does a flexible spine specifically provide?

The more supple spine of the cheetah also greatly increases the maximum forward extension before the feet start their backward acceleration prior to hitting the ground. Further, in the position of maximum extension of the limbs they are higher than for the horse. This allows the feet to hit the ground “running” or faster, driving the cheetah forward with more force.

There is a high degree of co-ordination between spine flexion and the placing of the feet on the ground to maximize drive and increase cheetah speed. The body is at maximum extension when the body is of the ground. This helps the front feet drive the cheetah forward more effectively when the front feet hit the ground. Sharp “contraction” (my words) of the spine (and body) takes place just before the front feet contact the ground and continues until just after the leading feet “follow through”. The same co-ordination between leg drive and spine flexion/contraction applies to the rear legs. The stride rate of the cheetah is also faster than that of a horse because the cheetah’s smaller muscles contract more quickly.

The supple spine improves cheetah speed in another technical way. When the forelimbs are in contact with the ground the shoulders of the cheetah are moving 2.5 mph slower than the cat as a whole. When the hind feet are on the ground the same can be said about the pelvis. This reduces the required backwards speed of all four legs to drive the cheetah forward. 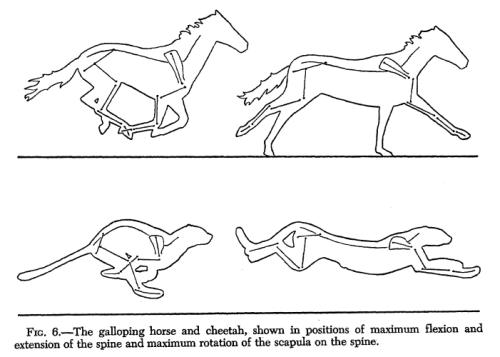 Cheetah speed. The amount of flexion and extension of the spine of the Horse and Cheetah
Reproduced under the terms of a license granted by www.jstor.org

Because of size, the horse needs to use muscles efficiently to run, as is the case. The cheetah need not be efficient as speed is the objective. The size of the cheetah is about optimal for speed. If the cheetah were larger the use of muscles would have to be more efficient to conserve energy. The cheetah is not smaller than she is (smaller would be better for endurance) because of the weight requirement to bring down prey, primarily, plus to be more independent of terrain irregularities and for wide vision. What though is the speed, accurately measured. There is a lot of anecdotal evidence or plain assessments. The truth is that on the internet there is a lot of rather rash statements about cheetah speed. Speeds of 70 mph are frequently quoted. In a quote of a speed of 71 mph, for example, a tame animal was timed over a supposed course of 80 yards (73 metres) in 2.25 seconds. However the enclosure was found to be only 65 yds (59 metres) long. Plus in this well known example there was an error of arithmetic and timings were imprecise (Hildebrand 1959). Another “estimate” by Hildebrand of 56 mph was worked out by analyzing film. NCC Sharp in his paper Timed running speed of a cheetah (1996) used precise methods to measure speed.

The method used to accurately measure cheetah speed, can, I hope, be summarized as follows. An adult female was the subject. She weighed 35 kg. She was orphaned and raised on a Kenyan farm (Kenplains Farm, Athi River, Kenya) by Dr, David Hopcroft. Although returned to the wild she returned occasionally. On one of the return visits the timings were conducted as follows:

Cheetah Speed as a sport

There is no doubt that we (as humans) find the cheetah’s speed fascinating and have converted this fascination into sporting entertainment. The cheetah was (and perhaps still is) used in hunting. I recount a story from the Times archive of a maharaja in India who hunted Black buck with trained cheetah (read the story on this page). The Black buck is very fast (50 plus mph) but no match for the cheetah.

No less of a sport is racing the cheetah against greyhounds in England on dog racing tracks. Once again thanks to the Times archive a story dated December 11th 1937 in the Times newspaper reported on the importation of 12 cheetahs into England. They were all tamed and behaved like domestic cats. Cheetahs it seems have a great propensity to be domesticated and form relationships with humans very similar to the domestic cat.

After the usual 6 months quarantine, they were raced against greyhounds chasing a false hare. The cheetahs chased the hares, beat the greyhounds by a mile and the dogs and cats got on like a house on fire. I still think the whole exercise shows a lack of respect for this animal. We should leave her alone in the wild. We just like to relate to the cheetah on our terms or not at all. Habitat: The cheetah’s speed is only effective in the right open habitat – click on cheetah habitat to read about it.

As mentioned, at the beginning, a large part of this article was written with the help of a research paper in the archive of Jstor. As I understand it, their license on the purchase of the paper allows the individual to reproduce parts of the paper provided it is not for commercial gain and it is an educational presentation. I believe this page complies with the terms and conditions. If someone disagrees please tell me and I’ll take immediate action.

Leading photo and photo 2nd down – published under a Attribution-NonCommercial-NoDerivs creative commons License  — this site is for charitable purposes in funding cat rescue – thanks.