The cat skeleton is both strong and light having evolved for speed and agility, which is demonstrated in the cat’s wonderfully graceful movements including its jumping and climbing skills. The back is highly flexible, which is geared for speed. And the shoulder blade (scapula) is unattached to the main skeleton providing more flexibility. The hind leg structure is designed for power not endurance4. The cat’s skull has large eye sockets as the cat has relatively very large eyes4 for twilight hunting and a short jaw that opens widely and bitesstrongly. The bones of a skeleton are held together by ligaments (fibrous tissue that connects bones to other bones3). A sprain is a torn or stretched ligament5. Evolution has created a skeleton fit for a top predator. 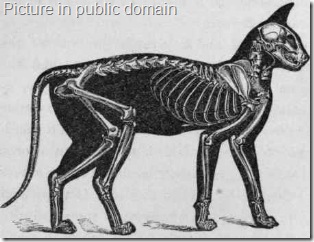 You can read about the world’s fastest land animal and how it achieves its speed with the aid of the flexible spine, here: Cheetah Speed. The world’s tallest domestic cat skeleton at 17.1″ to the shoulder belongs to F1 Savannah cat Scarlett’s Magic. The purpose of the cat skeleton is to:

The skeleton of the domestic cat is almost identical to that of the big cats (tiger, lion, jaguar & leopard) except for its size.

In the cat skeleton there is a small, vestige, of a collar bone (clavical) allowing for better mobility of the forelimbs. The cat’s legs are slender, some cat breed 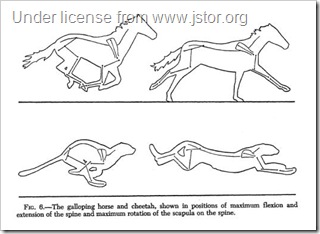 s have more slender legs than others. Some have slender legs and cobby (stocky) bodies, for example the Chartreux. Some have long legs and slender bodies…the cheetah wild cat and the Savannah wild cat hybridcome to mind.Of the totally domestic cat breeds, the Egyptian Mau is said to the be the fastest (30+ mph) with a slender athletic and flexible frame and a belly flap(lose skin on belly). When a cat walks the shoulder blade rises above the spine. In a three-legged cat this is more pronounced as there is extra pressure on the remaining leg. Long legged cats are good jumpers. The picture opposite, right, shows the relative flexibility of the cheetah’s back (and all cats) over horses, as one example. Cats lack endurance because the generation of power is inefficient compared to the horse. The sacrifice of efficiency is compensated for by an advantage in speed.

The refinement of the breeds affecting the cat skeleton

The skeleton of some of the domestic cat breeds has been altered through selective breeding, while random cats have a cat skeleton that is still very similar to the European wild cat (see also the Scottish wild cat) and African wild cat.

The most noticeable “refinements” to the skeletons of the recognised cat breeds are the slender “foreign” frames and long heads of the Modern Siamese and associated cat breeds such as the Oriental Shorthair and the rounded flat face of the Ultra type Persian (see cat head shape and cat body types) and Scottish Fold. A number of cat breeds have been created (selectively bred) around abnormalities of the cat skeleton:

Note: the Scottish Fold has defective cartilage causing the folded ears and it has been bred for a rounded head.

The cat’s skull has large eye sockets. A cat’s eyes are eight times larger than ours in relation to head size. The jaw is strong and specialised as bite strength has to be high to capture, hold and kill prey. The jaw is short, and it opens wide. The cat has a short face compared with other domestic animals, but you will see selectively bred flat faces both in cats and dogs causing health problems. These are controversial changes to the elegant anatomy of cats which has evolved over eons. The most dramatic alterations are those in the length of the head or muzzle. At the other end of the spectrum, we have the elongated heads of the Oriental shorthair and modern Siamese cat. Breeders tend to lean towards extreme breeding to attract attention and arguably the cat fancy has been remiss in condoning and even encouraging the creation of extreme heads which are negatives to health.

Cats have what is called a “sagittal crest” along the top of the skull. It’s a ridge which runs down the midline and which can be felt when you stroke your cat’s head. Many carnivores have this feature. Its presence indicates that the jaw muscles are strong, and humans don’t have it. You can read more about the feline sagittal crest by clicking on the link below.

Let’s not forget that the cat walks on its toes (see cat paws); they are digitigrades. This means that the veterinary operation highly misleadingly called “declawing” is particularly cruel. And I should say that Dr. Bruce Fogle, the well-known veterinarian and author, is wrong to describe the claws of a domestic cat as “retractable”. The default position for a domestic cat’s claws is retracted i.e., taken off the ground and hidden.

The claws are “protrusible” which means that the cat protrudes them to obtain a firmer grip on an object or the ground through a conscious effort. Claws grow from the last bone of the toe and are anchored by tendons. Declawing is actually a partial amputation. Claws are a modified skin. The outer hard cuticle is of protein i.e., keratin and this protects the dermis or quick. The ligaments at the top of the paw naturally sheath the claws. This is a taut, elastic ligament and the cat exposes its claws by contracting the digital flexor muscles on its legs which pull taut the flexor tendons under the paw.

There are three types of joints in the cat skeleton:

Ligaments hold the joints together. It is a band of tough, fibrous connective tissue made up of attenuated collagenous fibres. Ligaments do not connect muscles to bones, tendons do that. They are elastic and when they are under tension, they gradually lengthen. Tendons by contrast are inelastic6. 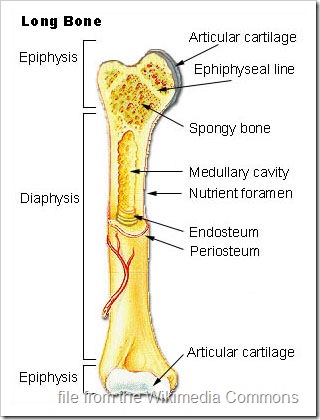 The structure of bone

The primary tissue of bone is osseous tissue. This is a relatively hard and lightweight composite material, which is formed mainly of calcium phosphate. Internally the bone has a latticed structure of hard struts called trabecullae. Bone has a blood supply.

When born the bones of the kitten’s head are separate bones, which fuse together. A soft area can sometimes be felt on the top of the head. The limbs and ribcage begin as cartilage and then calcify, the cartilage being replaced by bone. Dwarf cats have short legs because of a defect in the production of cartilage (see health issues of dwarf cats). Bone outside of the bone produces new bone cells making it thicker.

Bone length is increased as the cat grows by the production of new bone at the growth plates (epiphyses: the epiphysis is the rounded end of a long bone, at its joint with adjacent bone(s)8). Growth and sex hormones affect growth of the cat skeleton. Neutering cats early tends to lead to longer legs, so sex hormones inhibit growth slightly. Bone breaks are repaired by the production of new bone to fill the break1.

Finally, although the cat’s skeleton is one of evolution’s great achievements as it is so elegantly designed for speed, agility and predation, problems such as arthritis and de-calcification are caused by dietary and hormonal upsets and disease. These problems are not caused by the beautiful design of the skeleton. The alteration of the skull shape in some purebred cats is due to extreme selective breeding. This process also has changed the shape of the general skeleton turning the cat from a lithe creature to one which is stocky and in the words of the cat fancy “cobby“. This was done to make the cat more attractive looking to purchasers, but it goes against nature’s design.

However, nature can affect the skeleton. For example, in hot climates cats are naturally smaller because they have larger surface-area-to-weight ratios which helps to keep them cool. And in the north, for example, the Siberian tiger is much larger than they Sumatran tiger for this reason. And among the domestic cat population, free-breeding cats in places like Russia and Canada have larger heavier skeletons than those in the south. This may account for the larger than average Maine Coon (other than selective breeding).

The Maine Coon cat is a particular interest in this article because of known inherited health conditions: hip dysplasia and patella luxation. Hip dysplasia is common in Maine Coon cats (25%) and one issue is that the bigger the cat the worse the problem. It describes a poor joint between the thighbone and the hip bone which is loose. This problem has occurred because of selective breeding. You can read more about it by clicking on the link below.

RELATED: Why do Maine Coon cats get hip dysplasia?

Sometimes through a spontaneous genetic mutation, the skeleton is altered, and that alteration remains because it occurred in an island population where the alteration in the cat’s body did not detrimentally affect their survival. I am referring, for example, to the Manx cat which is tailless. Tailless breeds have all developed islands and in living in a confined space has helped to perpetuate the mutation.

Some alterations to the cat skeleton through genetic mutations are benign such as polydactyly which is seen predominantly in Maine Coon cats originating on the east coast of America. You will see a high proportion of seven-toed cats around Boston, Massachusetts and Halifax, Nova Scotia.

Note: This page was first published in 2012. It has been updated and amended and republished today September 13, 2022. Further changes will be made to the page no doubt in the future, and it may then be republished.

Cat Skeleton — Sources: 1. The Encyclopedia Of The Cat by Dr Bruce Fogle

4. The Cat, Its Behavior, Nutrition & Health by Linda P Case

9. Me -the author of this site: Michael Broad