I have seen it happen on two distinctly different occasions. However, the underlying conditions were the same: anxiety caused by the presence of unknown cats and/or a change in surroundings.

On the first occasion I was at a cat show in London, England. In fact, it was at Olympia in central London as I recall and the show was run by the National Cat Club, which I think is the oldest cat club in the world but I may have that wrong.

The cat was a gorgeous grey tabby British Shorthair cat sleeping in his or her litter box within a cage waiting to be shown. It looked odd to me at the time, which is why I took the photo. I also liked the grey coat against the grey litter and the comparison of textures. The year was 2008: 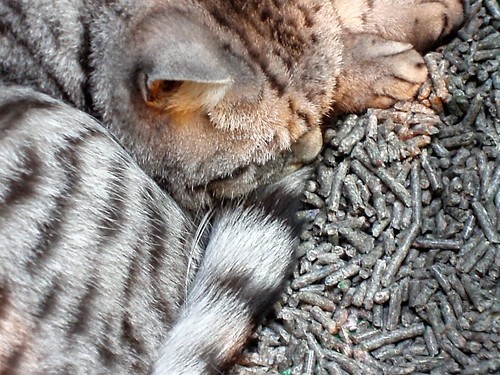 I quite like the photo even if I did take it myself (with a relatively inexpensive digital camera).

The other occasion was at my home and it concerned my elderly lady cat, Binnie. I had recently introduced Charlie a three legged cat who used to live with my mother who had died. I took him on knowing that it might be complicated etc.

Binnie, who by the way is now used to Charlie and accepts him, at one time started to sleep and rest in her litter box. This was a classic case of a “cat sleeping in litter box”, a Google search phrase.

As can be seen both circumstances are essentially the same.

The cat sleeping on his or her litter is seeking the familiarity and therefore comfort of its own surroundings in its smell, the smell of its litter to alleviate the anxiety caused by the presence of a foreign cat. The cat is retreating to a place that is friendly and the most obvious is the strong smell of itself through its urine and feces. As we know smell is a major factor in a cat’s life. They almost “see” through smell and confirm and check through smell. Does you cat join you when you are on the toilet!? Mine does – same underlying principles.

Scent exchange is based on similar principles. Cats rub against us when they greet us and they do the same when greeting other cats sometimes (in a colony for example). They are depositing their scent on us to make us more friendly to them. Head butting is a version of scent exchange.

Like us, cats seek a “comfort zone”. For us it is familiar surroundings, people and activities. The same applies to the cat.

The “problem” (it is not really a problem) should fade away gradually as the cat becomes more relaxed with the other cat(s) and surroundings. Plenty of TLC from us should speed things up such as extra play and grooming.

From Cat Sleeping in Litter Box to Why Do Cats