The fishing cat is a specialist swimmer and hunter in, on and around water. Its name reflects its skills. This cat has partially webbed feet, is strongly built, has a tail that acts as a rudder and it can swim for considerable distances under water.

This is a small to medium sized wild cat that is about the twice the size of a large domestic cat. As expected, its primary prey is fish. Although it takes a wide range of prey including coots and ducks. It has been reported to have attacked and killed fawns, calves, dogs and children! Local people would seem to be frightened of this cat. They kill it while mistaking it for the much larger leopard. The fishing cat hunts nocturnally. It is found in Asia and is sometimes called the “Asian fishing cat”.

Its scientific name is: Prionailuurus viverrinus. It was classified by Bennett in 1833.  The second part of the name reflects its similarity in appearance to the large Indian civet (scientific name: Viverra zibetha)

This is a powerful, stocky medium sized cat that weighs between about 5 to 16 kilograms or 11 to 35 pounds (the figures includes females and males hence the wide disparity in weights). It is said to be the size of a baset hound. Being part of a group of cats that includes the rusty-spotted cat, flat-headed cat (another cat that fishes) and the leopard cat, it has distinct stripes and spots on its head and body.

There are a number of wildcats that like water but this cat goes a step further. This wildcat species is a strong swimmer. The tail is quite short and thick at its base. It is believed to act as a rudder. This is a nice adaptation of the tail that acts as aid to balance for cats that are arboreal.

The toes of the forepaws are partially webbed and the claws protrude even when retracted.

This map, based on the IUCN Red List map sets out the now fragmented but wide range of the fishing cat. it is found from northern India to Southeast Asia.

This fishing cat is now mainly found in the area of East Asia that includes Myanmar, Thailand and Cambodia. The population is diminishing and although the map marks the Indus Valley in Pakistan as part of its range, it may no longer be found there. Range maps are constantly changing – shrinking to be more accurate.

Understandably for a specialist cat, it lives near water but is sometimes well away from water. Its habitat is mangroves and marshes and dense undergrowth close to water. It is also found in reed beds and tall grass areas.

It can scoop fish out of the water with its strong forepaws having agitated the surface of the water. It also swims to catch ducks and coots and frogs. It sometimes dives in the water from a branch to catch fish in its mouth. 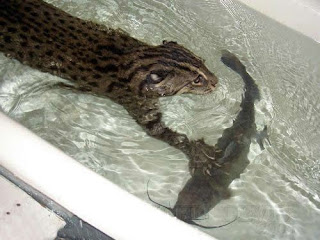 It is said that this species of wildcat can be tamed and become affectionate but I know of no domesticated fishing cats and I am fairly sure they make poor pets. They are known as fierce hunters in the wild.

The males have home ranges that overlap female ranges. This is typical of wildcats. Male home ranges can be 16-22 km². Female home ranges are smaller at 4-6 km². This cat’s vocalisations are not well known but include: chirrup, chuckling call and gurgle.

Mating takes place in January and February. Kittens are present in March and April. Birth dens can be in dense reeds. Litters are 2-4 kittens. Gestation is approx. 62-70 days.

This cat is assessed as Endangered by the IUCN Red List of Threatened Species™ (Update Dec 2017: now Vulnerable which is less severe. This surprises me.). This may be too generous an assessment as the fishing cat is rarely photographed in camera traps despite good efforts. A shock may be about to arrive in respect of population size which appears to be lower than estimated. Population is declining. Habitat destruction is the main threat to survival.

Not common in zoos. 33 in all of N. American and Europe. Probably inbred threatening sustainability of captive population. Wildcats do badly in captivity in general.

See another earlier page on this cat.