Before I put pen to paper in earnest on the subject of the history of the American Shorthair cat, I must thank Valerie Edwards of Fenton Farm. She has the most detailed version of the history of any cat breed that I have seen. I simply cannot cover all the ground that she covers. I haven’t got the patience or stamina! The source of this page is, though, primarily from the Fenton Farm website.

So, the early (pre-American) history of the American Shorthair is the history of the British Shorthair. We know that British Shorthair cats came over with the European Settlers as there is documentary evidence. Valerie Edwards mentions an “e-colored Shorthair female” (calico) that came over and had kittens indicating that there was a male cat on the boat too. It makes you wonder whether they were brought over just to catch mice on board the ship or to do that plus catch rodents amongst the grain stores as well. Probably the latter.

RELATED: 12 facts about the British Shorthair

This was well before the idea of the cat fancy was even a glimmer of a dream. The Maine Coon cat breed started life in the United States in exactly the same way, incidentally; brought over as a mouser except it was the longhaired Angora cats that were on board the ships that created the Maine Coon, America’s other “native” cat (see Maine Coon cat history).

The Beginnings – going right back to the first Brit SHs

We can, it seems, trace the British Shorthair cat, the founder of the American version, to the time the Romans were in Britannia (UK now). The Romans invaded Britain about 50 BC and in the early 10th century introduced European shorthair cats to the country. These cats were well regarded because they were highly effective at keeping down the rodent population that fed on grain and they were, therefore, useful. They were rare as well. So well prized were they that they were protected under the law.

These must have been the first animal welfare protection laws anywhere in the world for domestic animals (see Cats and the Law). Apparently, the penalty (a fine) for stealing or injuring an early pre-British SH was a ewe and her lamb. This is indicative of the fact that at that time most people farmed to survive.

The penalty for killing a shorthaired cat at that time was enough grain to cover a cat from the tip of the tail to the ground, if the cat was suspended by its tail with the nose touching the ground (sounds horrible – src: Valerie Edwards). I presume that this must mean a pile of grain about 3 feet high. If that is the case it was probably very valuable (covering quite a large area) and, perhaps it was intended to reflected the fact that the cat killed would have saved that amount of grain if it had not been killed!

A painting by Francisco de Goya of a boy with cats created in 1784. It shows the Shorthair cat. At that stage the European Shorthair was the precursor of the Brit and American SH.

Except for this “mistake” I think that we can presume that the shorthaired cat in what is now the UK was a reasonably well treated (tolerated?) domestic cat but not in the way we think of a domestic cat now. No carpet, no central heating and no cat trees bought from PetSmart! The food was probably better though. At least it would have been natural (mice). Not everything improves over time, does it? Although there was neither a cat fancy not purebred cats, the forerunner to the formally recognized American Shorthair was, in fact, purebred by “default” (as Valerie’s says) and with an unrecorded pedigree.

OK, let’s move forward to just before the inception of the cat fancy in about the middle of the 19th century. At that time the non-purebred shorthaired cat living in Britain (the forerunner of the British Shorthair) that was originally imported into the country by the Romans was a true domestic cat albeit in a different way to now. Then along came the “cat fancy” and things changed. In parallel, in America, we had a short haired cat, the same cat as in Britain. The early years of the cat fancy in England produced some notable British Shorthair cats and, according to Valerie Edwards one such cat was Jimmy: 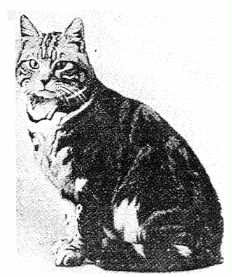 Jimmy was extremely expensive. It doesn’t take tables and calculations to realise that. £2,000 over 100 years ago was hugely expensive, far beyond the value of domestic cats today. For example, the very best Savannah cats are perhaps valued at about $35,000 (£23,000 at April 2009). Surely this tells us that the cat fancy at this time (at the beginning) was very exciting. People were looking to the future and some breeders were very rich! Valerie Edwards of Fenton Farm says this about Jimmy:

All independent silver tabby bloodlines were crossed with Jimmy, his sire or descendants, so that today ALL silver tabby American Shorthairs (and most other colors) claim him as an ancestor….

In the earliest English studbooks, there were lots of silver classic tabby “Shorthairs” and NO silver tabby longhairs, so the silver tabby gene originated in the Shorthair breed.

I apologise for quoting but I wanted to get it exactly right. The important point to make from Valerie Edwards’ point of view is that Jimmy has plenty of “type”, he could have been a damned good American Shorthair but this was 1896 before the breed was invented. She admits that he would be marked down on some factors such as the muzzle, which could be more square and broader for an American Shorthair (in respect of the modern breed standard – perhaps the breed standard is wrong not the cat?) and the ears are set too high by modern standards but Jimmy was a great cat. Look at his face; the expression.

There were other important individual cats in the early years. Here are two more from the American cat fancy and then I will leave it at that: 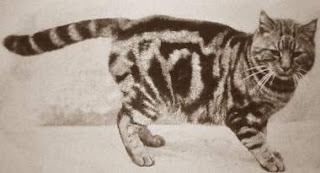 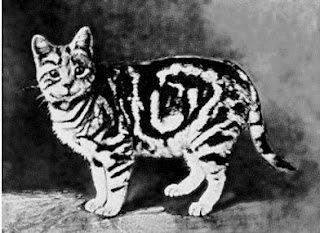 Early part of the 20th century

In the early part of 20th century America had its own random bred shorthair cat. They called them “Domestics”. These cats bred with other cats imported into the country. These were foreign breeds. This caused a change to the appearance of Domestics. A group of dedicated breeders wanted to preserve the original look and so they set about selective breeding the cat to create the American Shorthair that we know today.

In the beginning they were called Domestic Shorthairs. In 1966 the name was changed to American Shorthairs. The intention was to reflect the fact that this was and is an American cat. An early breeder was Whitney Abt. She ran the Grey Horse Farm cattery. She was the founder of a now defunct cat registry called CROWN. She bred a Grand Champion by the name of Perfect Gem. Since then, further selective breeding refined the cat breed to the appearance we see today.

Moving forward, the American Shorthair was the 8th most popular cat breed in 2020 according to the CFA. The British Shorthair was 5th. This is shows us their enduring popularity as there are around 104 cat breeds in all on my reckoning although the CFA currently recognise 45 cat breeds. The infographic below tells you more. Click on the image to see it much larger.

You can see the up-to-date version of this cat breed on this page together with a tabled summarized version of the history of the breed focusing on what happened in the latter part of the 20th century. In short it is what happened after what is discussed here.

From History of the American Shorthair to Home Page

History of the American Shorthair – photos: The copyright on the photos has expired.

American Shorthair cat ‘Piper’ and one other, both silver tabbies

I believe that the American Shorthair is an underrated purebred cat. This is a cat with a long American history, ...
Read More

16 facts about the American Shorthair cat

The American Shorthair is described as "the beautiful working cat of the United States". The experts say that cats of ...
Read More

This is a quiz on this very popular and well known cat breed. This is quite a tricky quiz but ...
Read More