Serval Jumping on to Prey

Serval cats are found in a range of grassland in Africa including grassland that is associated with water courses. They can also be found in forests, but not dense forests such as in Equatorial Africa. The serval can cope with cold temperatures, which occur at high altitudes such as in the Kamberg Nature Reserve (1,585 - 2,244 meters with a mean minimum temperature in midwinter of 0.7ºC). Under cold conditions servals can curl up and allow their body temperature to lower1.

The activity of serval cats is dictated by human, competitor and prey activity. If, for example, there is nocturnal competitor activity the serval might favour daytime hunting. As human activity is generally daytime this drives the serval to nighttime activities.

A study indicated that in the Ngorongoro Crater (see map) servals hunted in the early morning and late afternoon (crepuscular activity as is the case with domestic cats). Whereas in the Rustenburg Reserve, South Africa and the Kamberg Reserve in Natal, serval cats were found to be mainly nocturnal2. Although, serval cats also hunt in daytime and rest during the hottest period in the middle of the day.

Servals locate prey with their excellent sense of hearing and sound collected from their large oval ears. Servals don't like noisy conditions as it interferes with sound detection. Windy conditions are noisy so they wait for the wind to die down.

Serval cats are highly impressive jumpers, on a par with the caracal. The long levers in their legs and rangy bodies allow for this athleticism. They can jump as high as 3 metres in the air and a "single pounce" can cover 3.6 metres horizontally3. The vertical jumping skills enable the serval to catch birds in flight as is also the case with caracals. 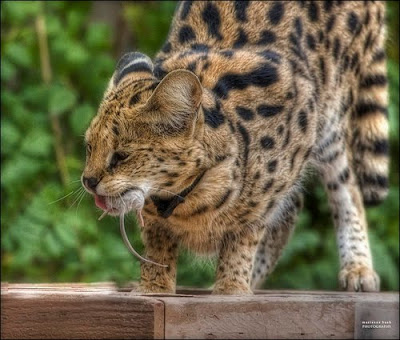 The serval hunts by moving slowly through the grass, stopping and listening. When small prey is located it will locate the exact spot, stalk for a short distance and leap. The forepaws stun the prey; a bite to the neck kills it. If the strike misses the cat will bounce up and down on top of the prey with all four legs off the ground. In Zimbabwe most of its diet is made up of the multimammate mouse and vlei rat. In Tanzania rodents represented 98% of the serval's prey. These small animals are swallowed whole immediately and this includes small birds. Larger birds are plucked (cat eats a bird).

Servals can also use their long forelimbs to poke into burrows and pull out prey with their long toes and sharp claws. Sometimes the serval will dig out a burrowing mouse for example.

This adaptable cat is prepared to wade into water to go fishing and to catch frogs and water birds.

The serval will occasionally kill larger prey such as duiker (see photo) and young antelope but nearly all prey is under 200 grams.

2. Wild Cats of the World by Sunquists Page 144. (and General resource)

From Serval Cats Ecology and Hunting to Serval Cat