The homing instinct of cats and dogs are well known but how does it work? Here are some examples of cats finding their way home over long distances: 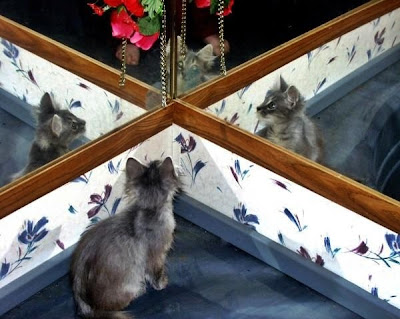 You can’t confuse me! Furby surrounded by mirrors
Photo by Joyce Sammons
What is the explanation? These are the theories:

On a more simplistic level, we only have to look at the wild cats. Some have extremely large home ranges of hundreds of square kilometers. The snow leopard comes to mind as one example. They navigate and patrol these areas effectively. My theory is that cats and dogs use a wide range of signals to assist them. Some are commonsense and some may be related to science which we are unsure about.

Another factor in the success of cats to travel long distances to return to their families is their survival instinct. Cats as we know have nine lives

and they sometimes use up some of these on the hazardous trek home. The homing instinct of cats are remarkable.

It also begs the question as to whether people (or at least some of us) have the same or similar skills!

The Homing Instinct of Cats to Cat Facts

The Homing Instinct of Cats – source material: Play It Again Tom by Augustus Brown – thank you.