This picture was taken in Thailand which was once called Siam - the home of the native Siamese cat: source: http://home.earthlink.net/~sarsenstone/thailand.html

While we are talking about original or "true" Siamese - I wanted to mention a cat that you have on your Manx page that you think maybe a Manx / flame point cross.

In the Siamese breed, to have a partial tail, kinked tail, bob tail or even like a Manx - no tail, is a "common error". However, in "nature" on the street in Thailand (which was old Siam) many cats have blue eyes, "points", and these differences in their tails.Basically - just as breeders have decided what is the "right" look for things like shape of head - they've decided that having a less than long thin straight tails is wrong.

However, tails that are not long, thing and straight are so common naturally amongst cats in Thailand that a lovely myth developed about how the King's favorite cat’s tail got kinked while saving his life and ever afterward the brave cat's offspring was marked with these "crooked" tails.

Here are two photos of cats taken from the streets of Thailand with their "special tails." The come from the Sarenstone Cattery breeders of the old style Siamese cat (Thai cats) - links open in a new tab or window. 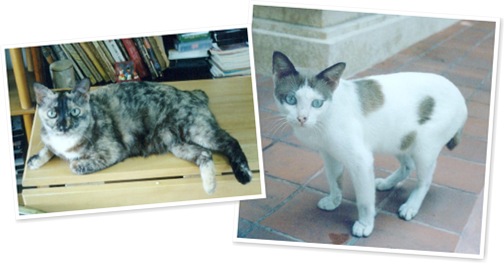 And -- while some people think of Flame Points as a "newer" color - you can see from photos taken in Thailand that red is a color found in the gene pool as well as a wide variety of coats patterns and eye colors - yet they do somehow look "alike" and couldn't be mistaken for a "British shorthair" for example.

Hi Madeline.. thanks for this. I absolutely agree. As far as I can remember, the kinked tail of a Siamese cat was considered special as you say. It was something to be admired and was part of the breed but Siamese cat breeders from the 1950s onwards wanted to "refine" the breed. Look what they came up with!

Madeline, as you can see I have changed the title and one or two other things. I hope you find this acceptable. I have included a link to what I believe is your cattery's website as I have published the photos of the short tailed cats on this page rather than links.

From The Kinked Tails of Siamese Cats to Applehead Siamese cat