The best Siberian tiger picture is probably a Flickr photographer’s photo and they are on this page together with a full verbal description of this tiger and a video/slide show that also contains some basic information about this big cat – you can’t get better than that……..! Here’s the slide show:

As I say in the video this is the only striped wild cat. There are striped domestic cats – mackerel tabby cats. One, the Toyger, is bred to look like the tiger so it has to have stripes.

The Siberian tiger is meant to be the heaviest and biggest but actual weights of true wild cats are hard to come by. There may be a bit of exaggeration on occasion. The Sunquists (Wild Cats Of The World – a reliable source) refer to an average of four males of 221 kg. See Wild Cat Species by Size.

The background colour of the tiger is reddish orange (see Orange Persian Cat). There is, however, a lot of white on a tiger including around and on the face. The inside of the limbs, belly, chest, throat, muzzle, above and immediately below the eyes are white. The ears are small and there is a white spot on the back of the ear flap. The tiger tail is ringed with black or at least very dark bands.

The markings have a symmetry about them, split down the middle of the cat as if he or she has been assembled in two halves. Tiger markings are unique to each cat and have been used as a way to identify cats using sophisticated techniques: Tiger Patterns and Stripes (new window).

I always thought that the tiger’s bright high contrast coat was poor camouflage when compared with the duller more neutral coloured cats such as the Lynx. However forest dwelling cats do have colourful coats. The margay and ocelot are good examples. The tiger is essentially a forest dweller (see forest dwelling wildcats – this is an PoC Ezine page) and in the dappled forest light and amongst the landscape broken by the shape of the trees, the tiger pattern and colouring is great camouflage. The outline of the cat is broken up by the stripes. Of course, in the snow it cannot be quite as effective. 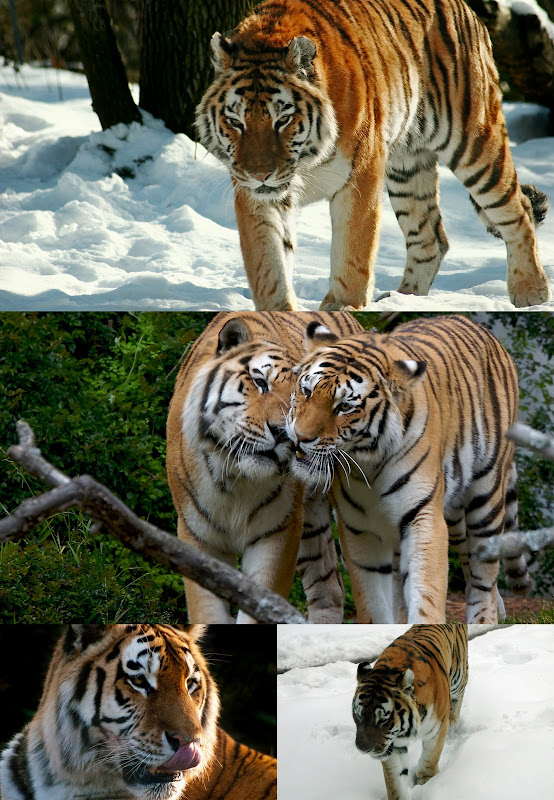 There are white and black tigers. These are the result of the mutations of recessive genes that govern coat colour and density. These tigers are not, of course, different species, just variations of the same species. A mutated gene might dilute the colour in a white tiger, for instance (also see White Siberian Tiger – new window). Black wild cats are called melanistic cats (see for example a black jungle cat hybrid and the felis chaus). This comes from the black pigment in the individual hairs that is called melamine.

There are records of black tigers but there are no skins or museum specimens.

Tigers are powerful animals with forelimbs that are larger than the hind limbs. They are used to pull down large prey. Tigers need to prey on large animals. The skull is large and short which increases bite strength. The bite of a tiger is stronger than the bite of a lion. (see Lion vs Tiger)

Tigers are taller at the front than the rear and stand a bit less than three feet (33 inches) or one metre tall. The tallest “pet cat” is MAGIC an F1 Savannah standing 17.1 inches tall to the shoulder. This makes a nice comparison.

The tiger body is long, strong and lythe. In cat fancy language it would be described as having a “foreign” type. See Cat Body Types.