Date of posting: 17-9-09 – where do cheetahs live?: On the Cheetah Habitat page I discuss the type of landscape in which cheetahs live. Here, however, I discuss the location of that habitat. A bit of history first. The cheetah was found in Europe (believe it or not), Asia, Africa and North America (also rather hard to believe). About 400 years ago it was found in India (west and central India). It also occupied countries of the Middle East: Palestine, Syria, Iraq, Iran and Afghanistan.

It is hard to visualize the cheetah geographic range including some of these countries now. A lot of them are associated more with war that wildlife.

Today it is reduced to living in parts of Africa, many areas being fragmented. It also occupies an area where the boundaries between Iran, Afghanistan and Pakistan intersect (but see Wikipedia map below). As at 2002 there were reports of the cheetah living in the Khosh Yeylagh Wildlife Refuge (NE Iran) (src: Wild Cats of the World). The Iranian Cheetah Society website (website down as at 28th Aug 2010 – is this due to the Iranian government?) refers to the Asiatic cheetah living in the Khosh Yeylagh, Khar Turan and Golestan as surrounding habitats to the Miandasht Wildlife Refuge (see map below – you may have to zoom out by using the controls on the left of the image). The Golestan National Park is about 30 miles north of the Miandasht Wildlife Refuge.

The Wild Cats of the World book (published 2002) states that they may still exist in the former Soviet Union.

In Africa the cheetah habitat has and continues to be reduced dramatically, it would seem. The Wikipedia author, a biologist, presents the range of the cheetah as much wider (see map below – yellow areas) it seems to me than as indicated by the authors of Wild Cats of the World and the IUCN Red List of Threatened Species™ (Red List). All three sources produce very different pictures.

The book, Wild Cats of the World presents a fragmented range in central Africa and a more continuous range in east and south Africa. While the Red List presents relatively small well fragmented ranges in east Africa with large ranges in Namibia and Niger and also in Iran as indicated above. Wikipedia sets out the range in their map below, published under license. This map appears to be out of date when compared to the Red List map or perhaps the criteria for its creation is different: 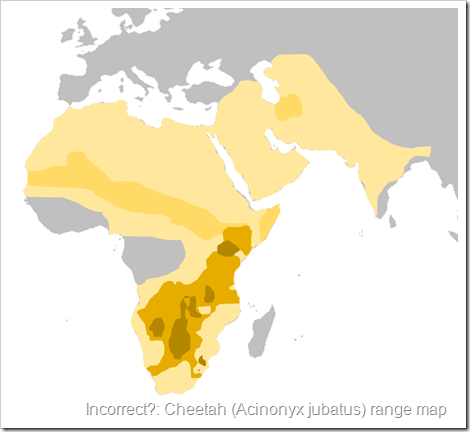 In answer to the question where do cheetahs live? — the Red List range map, which is no doubt the most trustworthy in terms of being up to date and cannot be reproduced here, provides the answer. The map below is a version of it. The gold areas are where the cheetah lives in Africa. In addition the cheetah (the Asiatic cheetah) as mentioned above can be found in Northern Iran (see Iranian Cheetah – new window). 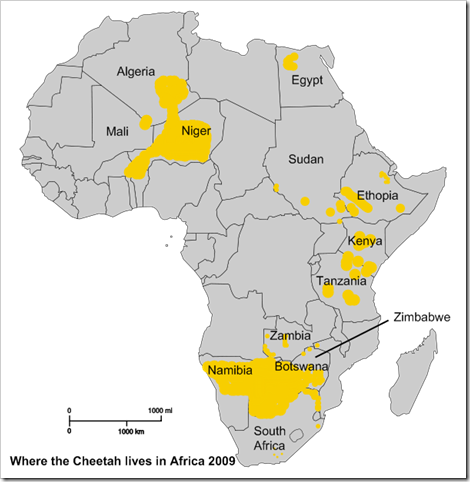 Blank map from which the above was made by Andreas 06

Where Do Cheetahs Live – Notes on the above map

Firstly, the Red List map is not completely definitive as insufficient data exists to create truly accurate maps. The map should be qualified by these remarks made by the Red List authors:

The map below is also taken directly from the Red List map but (and this is novel) it can be amended by anyone who has the knowledge and who wishes to contribute. Anyone can link to it at Google My Maps, Cheetah Geographic Range, (opens in new window) despite being made by me as it is a public document.

As stated you can go the original of this map and make it more accurate if you can but please explain yourself and respect the existing work.

New Page: Cheetah Geographic Range. A page devoted to discussing a larger version of the above map.

Where Do Cheetahs Live – names of countries:

Where Do Cheetahs Live to Wild Cat Species